This is an interesting case of Lucinda and her cat, Special. Some years ago, Lucinda had the same dream three nights in a row. It was of a white light coming down in a blue sky. Then she had this dream of a cat with certain markings three times in a row. She was wondering, What’s all this about? 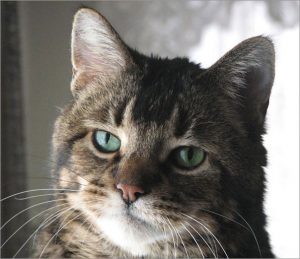 A voice told her, “This is a very special cat with a protection shield around him. Take good care of him, and give him a special name.” So she figured, OK, we’ll call him Special. And that became the cat’s name.

The cat showed up on the fourth day. She had three nights of these dreams, and on the fourth day here comes Special in the body of a kitten. He was hungry, abandoned, and lonely. She took him in right away and took care of him. She claims it was love at first meow. And it really was, because Special and Lucinda took care of each other.

Years passed. Then more recently, Lucinda left an abusive relationship, and her ex stalked her. One day she came home, and he jumped from the closet. She was so surprised, she didn’t know what to do. He had her on the floor. He was choking her, and she was trying to fight back, but she didn’t have a chance.

Suddenly out of nowhere this cat jumped on his back. It was Special.

The cat jumped on his back and scratched him and scratched him. In this way Lucinda could fend the man off. The police came just in the nick of time, got him, and he was sent to jail. And when he had served his time, he left town. At last word he hadn’t come back.

But there came a time when she had to let go of Special. They had been together fourteen years, but the vets said, “He’s got inoperable tumors, and there is just no way. Best thing is to let him go.” So she agreed to it.

But even after that, for the longest time she had all these misgivings. She even considered suicide; it had come to that.

So she went to her priest, and the priest said, “You did the right thing. Animals don’t have a soul. You made the right decision.” Lucinda was just seething. She had a different opinion about the whole matter, but she didn’t say anything.

About this time, she met an ECKist who happened to have lost a cat too. So there was a bond here.

But the most interesting thing was that, in time, Lucinda became a member of Eckankar through the ECKist she had met. The special legacy that Special had left her was an introduction, a doorway, to the teachings of ECK. So in his own ways, Special had done his part: Protected her in the first place, and now showed her a way to find spiritual strength. Very important. Special did his part twice over.

Excerpted from The Master’s Talks in A Year of Spiritual Healing—2014-15.

Has the love from an animal ever helped you through a hard time? How do you show your gratitude?