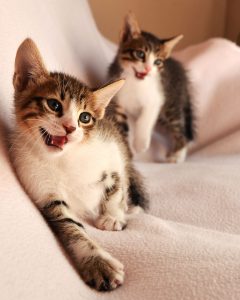 Laura Lee used to think that she was Crabby’s owner. Cats know humans have it backward, but cats are very generous. They allow humans their little vanities. If people want to think they’re the owners, that’s all right. Just bring the food at the usual time, and they’ll let it go.

After nine and a half years, Crabby passed on. Within a year, Laura Lee got a call from her son.

“Our cat has been in labor for three days and is having a very hard time,” he said. “It doesn’t look as if she’s going to make it, nor any of the kittens either. Could you come over and see what you can do?”

Laura Lee was a registered nurse, but she wasn’t sure how she’d be able to help a cat deliver her kittens. When she got there, she found that the first kitten was sideways in the birth canal, blocking it so that none of the kittens could be born. The mother cat was so tired that she simply couldn’t fight anymore, and it looked almost as though she were going to give up.

Laura Lee got the kitten straightened out and pretty soon the kittens were being born, one by one. When kitten number three was born, the three humans in the room felt a presence immediately.

They looked at the third little kitten and said, “It’s Crabby. Crabby the cat’s come back!”

Animals Are Soul Too

One of the basic beliefs in Eckankar is reincarnation. You and I are Soul. And this will be news for some people, but animals are Soul too. Cats, dogs, and birds carry bodies the same as humans do.

We wear a body like a suit. When it gets old and worn out, we get rid of it. Soul then goes to one of the heavens. St. Paul spoke of the third heaven, meaning there are more than two. Soul goes to one of these heavens; It has experiences there in a body that fits that heaven, that’s of the same vibration and matter. This is important, because otherwise people in that heaven couldn’t see each other.

A Strong Bond of Love

The mother cat recognized that Crabby II was Laura Lee’s cat from the last lifetime. And so, on the next visit, the mother cat brought the little kitten to her. Crabby II had exactly the same mannerisms as she did in her old body as Crabby I. But instead of being mean, she was kind and gentle and sweet to everyone.

She still had the same habit of getting underfoot and tripping her pet, the human. Cats that love you very emotionally will be underfoot all the time, so you never know if you’re going to make it from one room to another.

Cats’ tails always cause a meow of pain and indignation like, Why did you step on me again? The human pets can’t always look down there through bifocals to see what’s going on. A cat doesn’t know this, and a cat doesn’t care.

After about a year, Crabby II became a mother herself. Crabby II lost her milk, but she remembered how things should be done. 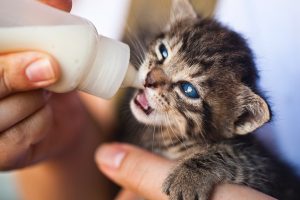 She came to Laura Lee, and she said, “Here take care of my kittens,” because Laura Lee had also raised Crabby II. Every hour and a half around the clock, from the time the kittens were three days old until they were weaned, guess who had to get up and feed them? Laura Lee. Sometimes she didn’t want to wake up, but Crabby II would nibble on her ear until she would have to get up and do it. You can guess who was very happy once the kittens were weaned.

Then Crabby II remembered the next thing: “Hey, this registered nurse litter-trained me. I think she can litter-train my kittens too.” So she turned the kittens over to Laura Lee for litter training.

Laura Lee had had a very good relationship with Crabby I. They had their own private language. They could speak to each other, communicate by images. Cats are very good at that. It’s a form of mental telepathy. Those of you who are cat owners know that. Crabby II had that ability and more.

Excerpted from: How to Survive Spiritually in Our Times, by Sri Harold Klemp