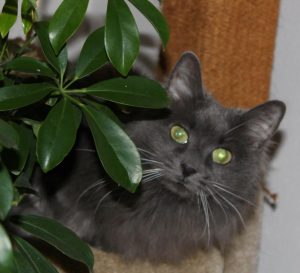 One night in a dream, the Mahanta, my inner spiritual guide, showed me holding in my arms a long-haired, gray cat with a curling, fluffy tail. I did an internet search for my dream cat, and soon I arrived, on my lunch hour, to meet the cat whose photo I saw on a website. The veterinary technicians filled me in on the kitty’s history. “She’s a very shy cat,” the vet tech said.

Hiding from Her Pain

For three months this little introvert had been forced to live at a small shelter with about ten to twenty other cats. She often hid in the kitty litter box—out of view from visitors, staff, and cat roommates. Yet when I walked into the viewing room, she immediately ran to me as if we were old friends. I couldn’t help but wonder if the Mahanta had arranged our mutual introduction in the dream state.

When I sat down on a bench and began to sing the sacred sound of HU, a universal song of love for the Creator, the gray cat darted over. She focused on me with her bright green eyes. 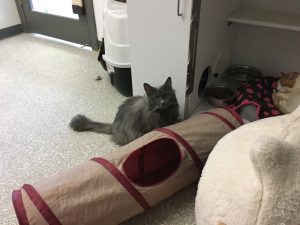 Then a little calico cat diverted my attention away from her by sidling up next to me on the bench. After listening to HU for a moment, the calico scurried off to wriggle inside a nearby long, tan, crinkly tube on the floor. Exercising her creativity and free will, the gray cat slapped her paw down firmly on the tube’s open end, trapping the calico inside by cutting off her escape route. She seemed to be saying to me, “Forget about him. I’m the one you’re supposed to take home.”

I sensed this determined cat knew the drill. She’d watched younger, more outgoing kitties being adopted. Due to her shyness and age, the staff had nearly given up hope of finding a home for her.

A week after my first visit to the shelter, Allen and I returned to adopt the gray cat. When we walked out with her in a kitty carrier, the receptionist cried tears of joy. Before we left we officially changed her name to Sweetie.

In her new home with us, Sweetie preferred being alone. We gave her plenty of space and patiently waited for her to show she wanted to make friends with us, our dog, and the bird.

Sweetie was content to spend the day alone on the second floor of our house while we went to the office. We’d never known a cat so at ease with solitude. Yet she didn’t act antisocial or fearful around us, and she roamed the entire house at night while we slept. Being self-contained and independent seemed to be her nature.

Over the next few months Sweetie’s unusual personality continued to emerge. Although she occasionally stopped by for a quick pat on the head from Allen, she decided that I was her person. When I came home, she greeted me and waited, not so patiently, for me to serve her dinner.

Sweetie required routine to an extent we’d never experienced with other cats. If something was done for the first time, she seemed to make a mental note that said, “This is the way we always do it.” Change in her routine was anathema to her.

Meals had to arrive at the same time in the same way every day. She refused to eat if we placed her food in a different spot. And I had to prepare it, so that the dish had my scent on it. Morning and evening, she ate only from two identical, dainty, white porcelain bowls to which she’d taken a liking.

She would consider sitting on my lap if I placed the green, not the blue, pillow on it like a throne. She expected me to prepare for work in the same way every day and positioned herself wherever I was supposed to arrive next. If I did something out of sequence, such as brushing my hair before putting on my makeup, it warranted a scolding from her.

The Opening of a Heart

After a few weeks, Sweetie started jumping onto our bed at night. She’d plaster her body alongside me and cuddle, holding on to my leg. She couldn’t bring herself to show this much affection when I was awake, but while I slept, she could release the love that was expanding and healing her heart from past losses.

She progressed to pawing at me for petting. She even began to let me groom her fur, and she’d turn around until her whole body and tail had been refreshed to her specifications. She showed toleration for the dog as long as he didn’t make quick movements or chase her. To make it clear she shouldn’t stalk the bird, I said, “We don’t eat family members in this home.” To my surprise, she would willingly turn her head and move away from the birdcage.

In the mornings Sweetie licked her paws while I gently rubbed her forehead and ears. Doing my spiritual exercise with her on my lap, I sang HU in soothing rhythm with her soft purrs. Together, we renewed ourselves in the Light and Sound of God. And this is how a quiet cat became my prayer buddy.

One day, Allen posted photos of Sweetie on our social-media pages. A man commented that she looked like a rare breed called Nebelung. We immediately researched the breed’s characteristics. To our amazement, online photos resembled Sweetie.

We discovered that many of Sweetie’s distinctive behaviors were unique to her breed. We learned that Nebelungs require a quiet, stable home and dislike change. They thrive on routine. Sweetie also stayed true to being born a Nebelung with characteristics such as shyness, loyalty to a favored person, and preference for privacy.

My dream of meeting Sweetie took on even more significance after reading about her breed. What were the chances of Sweetie being in a suburban cat rescue, near my office, where I could meet her on a lunch hour? What were the chances of finding a rare-breed cat whose inherited traits were well suited to the necessity of leaving her alone while we went to work?

Given the Nebelung’s ingrained traits, how astonishing was it that Sweetie could be healing from the past and growing to love and trust us? And yet, she had chosen to fit into our family and adjust to living with a cockatiel, a cocker spaniel, and two humans who didn’t always do everything as she expected.

Fate and Free Will

Sweetie has been a case in point for the blessings the Mahanta can bring into a Soul’s life. The Mahanta and the power of love can lift Soul out of Its karmic conditions to next steps on Its spiritual journey. Soul, in a cat body or any other, can use the God qualities of creativity and free will to rise above destiny.

In Autobiography of a Modern Prophet, Sri Harold Klemp gives a description of the interplay between fate and destiny that Souls experience:

Destiny controls the conditions at birth. Much of what an individual does after that is an exercise of free will. Free will may overcome the conditions of destiny, but first one must awaken his creative talents, through which he can then reshape his spiritual and material life.

To sum up, fate governs the conditions at a person’s birth; free will allows a choice as to how he will move within and beyond them.

Nebelung is a word that derives from the German, nebel, meaning mist or fog. Sweetie shines light through the fog of destiny by exercising free will and giving and accepting love—in her own sweet way.