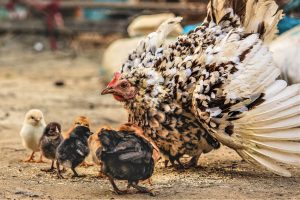 But in time, the little chicken grew up and wanted to have her own brood. Right on the henhouse floor, she tried to make a little nest and lay her eggs. But the other chickens would break the eggs when she was off eating. No matter how hard this little hen tried, she could never hatch any chicks.

The farmer had taken a liking to this underdog of a chicken. So he decided to build her a special coop away from the other chickens so she could have privacy and space.

In time, the little hen hatched a brood of chicks. Before long they were up and running around. It was warm, so she let them go outside in the yard. The little hen showed her chicks all the good places to find seed.

One day, they were out in the yard, eating with the rest of the chickens, when suddenly the flock scattered.

The farmer, watching from the house, saw a hawk in the sky above the chicken yard. The hawk was seeing a meal down below, and he was going to have some chicks.

The farmer started to go outside. All the chickens scattered, including the little hen, hiding under tractors and wagons. But the little hen saw that her chicks were still out in the middle of the yard. They hadn’t come to safety.

So the little hen ran out into the yard, calling to her brood. She spread her wings, and the chicks all ran under them. Then the hen sat down in the yard, and the hawk hit her hard. But before the hawk could do any more damage, the farmer arrived. And the hawk flew off.

The farmer stood looking at this pet hen. Looks like she’s gone, he thought. What am I going to do with all these chicks?

Suddenly the little hen hopped up off the ground, shook herself, and strutted off, as if nothing had happened.

The farmer saw this as an example of love that such a parent has for its own.

We humans have this vanity that tells us we are a special creation of God. But animals also have divine love pouring through them. And they also give this love to others of their own kind, and to others who are not of their own kind.

The quest for love.

Adapted from The Road to Spiritual Freedom, Mahanta Transcripts, Book 17, by Harold Klemp