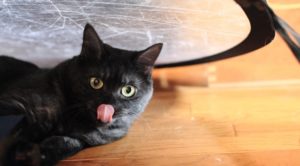 My sister wrote that two feral cats had come to their home. They had been just the neighborhood cats for a while, but my sister kept putting out food, and pretty soon the cats decided this was home for them too. Panther is the black one. He’s top cat. And Growler is orange and white.

The two get along fine except at feeding time. Panther has a habit of hogging the food dish. Whenever Growler comes up and wants to get a little bit of food, Panther will ease his body around in such a way that it very nicely pushes Growler away.

This happened day after day. But now, here’s the point: People think animals are not so quick. And some people think so especially of cats. Then the ones who have cats say, Well, you don’t tell cats anything; cats do just as they please. But cats can think. Cats are clever—very clever, once they put their mind to it. But that’s work, so they don’t always do that.

At one mealtime, Panther, as usual, crowded the dish. Growler sat there looking at the food dish. And then Growler’s left paw moved out to the dish and pulled it out from under Panther’s face. Panther just sat there shocked. He couldn’t believe what he had seen. He sat on his haunches and watched as Growler ate the food.

Now Panther was going hungry because this happened again and again. So my sister said, “There’s nothing for it. I’ve got to put out two dishes.” She did, and peace has come back to mealtime. 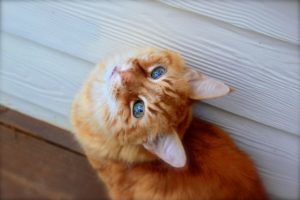 Each cat has his own dish, and they’re very happy.

The point is nothing changed until Growler used his creative ability. He sat there and thought, Yeah, this has gone on long enough. No deus ex machina is coming down from above to change anything. I’m going to take a chance and change it myself. I think he sent a very clear message: He was hungry too.

We grew up on the farm, and as I’ve mentioned many times, my sister and I and our brothers all loved cats. We understood cats. We could meow like cats; we knew the different meows. You’ve got to be young, when your voice is still nice and flexible, to get to the high notes, the trills, and all the other little sounds that cats make when they’re saying one thing or another.

We enjoyed the cats, and they became our friends, very good friends. When sometimes the troubles would get to be too much at home—the usual child-versus-parent type thing—I’d go into the woodshed, sit down, and talk to the cat. And the cat, Zsa Zsa, was very patient. Anyway, she liked the cookies I carried in my pocket for her. So I don’t know if she was really listening or didn’t care.

And the same for our dog too. Lady would listen very patiently. And she knew there was food about too. Animals can smell. Yet on the other hand, they did listen even when there was no food.