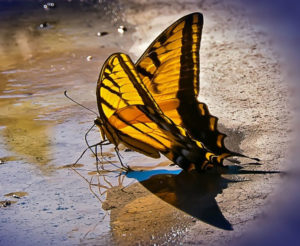 Her husband’s new company was very unfriendly toward him, and everything about their new home felt wrong. Over the weeks, the woman became more and more unhappy.

One evening just before dinner, her daughter came into the kitchen. In her hand on a little piece of paper, there sat a butterfly. It was a wood nymph, a brown butterfly with dark spots on its wings.

“Mommy, look what I found outside,” the daughter said.

The mother looked at the butterfly. She could tell it was just about at the end of its life. “Before dark, you ought to put the butterfly back outside,” she said. So the little girl carefully carried the butterfly outside and placed it where the family could see it from the kitchen window.

Later when her daughter had gone to bed, the mother looked outside. Maybe I ought to bring the butterfly inside, she thought. It’s not going to live very long, but it shouldn’t have to be out there in the cold. It could be here in the kitchen by the stove where it’s warm. So she went out and brought it inside the house.

The next morning when she came down to the kitchen, the woman saw that little butterfly was still alive. “Brave little thing,” the woman said. “It just seems to sit there. But it will probably die pretty soon.”

When afternoon came, the butterfly was still looking at her from its perch in the kitchen. “Maybe there’s something I can do for it,” the woman said. “Maybe it’s hungry. What do you feed a butterfly?” She didn’t know. She thought she’d try putting a little honey on her finger. She diluted a drop of honey with water and held it near the butterfly’s mouth. A tiny tongue came out, and the butterfly ate the honey.

The next day when the woman tried to feed the butterfly, it had more strength. It came toward her.

Pretty soon the butterfly didn’t want to get off the woman’s hand when feeding time was over. It would stay for a while because this tiny creature began to love her. And the woman began to love it back.

One day, she was wearing a woolen garment, and the butterfly got one of its legs caught in the wool. The leg got pulled off. Now it had only five legs. The woman was horrified. “Oh no, what have I done?”

But even with five legs, the little butterfly would always come out to meet her as much as it could.

The butterfly was nearing the end of its three-week visit. One night it looked like it was ready to go. Its wings were quivering, so the woman stayed with the butterfly for a long time. Then finally she said good-bye to it and went to bed feeling sad.

Next morning when she got up, the butterfly was still alive, but barely. So she sang HU, an uplifting, ancient love song to God. She put the butterfly on her finger and sang very gently to it with love. Soon after, the butterfly passed on.

The woman marveled about the way this little being had transformed her entire family in just three weeks. Her unhappiness was gone. The butterfly had brought joy into the home, and this joy was infectious. It caught her husband and her daughter, and especially it caught the woman herself.

Not only that, but the butterfly had taught her some important lessons. Such as patience. And endurance without complaining. It had showed her a strong desire to live. But most of all, it showed her how to love. During the three weeks of its visit, the butterfly transformed her from a person who was depressed and unhappy. It began to open and awaken the love within the woman again.

Sometimes the Holy Spirit sends other Souls to minister to people.