The local paper, the Star Tribune, carried an item about a week and a half ago. It was in a question-and-answer column about animals. It was less a question than a statement. This person wanted to tell something  about crow behavior. He said one day he was out by a pond and saw a crow tangled in a fishing line that was hanging down from a branch of a tree.

So the man got in a boat, paddled over, and worked at the fishing line until he was able to get the line off the crow. Then the crow flew up in the tree.

The man paddled back and got in his pickup truck. Then the crow flew down, landed on the cab of his truck, and rode it the few blocks to the man’s home. 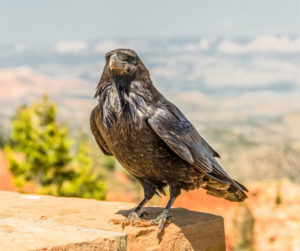 When he got there, the crow began to call and call. Pretty soon a group of about ten other crows came, and they all flew in a circle around his home. The man said, “I don’t care what anyone says; I know the crow was thanking me for saving its life.”

I thought this was just a beautiful story. There are all kinds of little expressions of God’s love that turn up, even in the daily newspaper. It’s this link between life—between Souls. Cats are Souls, as are dogs and crows. They’re Souls in certain forms.

Hearing me say this would offend some people. Because a lot of people feel they are the special creation of God, and they try to elbow out others, especially of the lower animal world—like cats and dogs and crows.

But it’s a vanity that was very much alive during the Middle Ages before Columbus came to America. Columbus was very wise. He picked up some of the natives—which was unfortunate for the natives—and took them back to Europe. If he hadn’t, he likely would have been accused of heresy for saying there was a land with people other than the ones in the known world. But the Native Americans were proof positive that something strange was going on out there.

You are Soul. We are Soul. And this expression of Soul extends far beyond the human form.