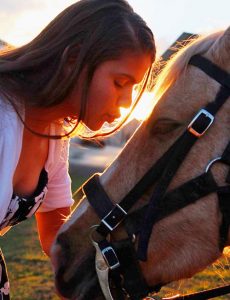 From early childhood, horses have fascinated me. I dearly love their smell, sound, and touch. They each have their own personalities. Some are easygoing; some are cranky-pants and stubborn; others are as open as blossoming flowers. I call horses lovely, four-legged people.

One of four siblings, I grew up on a cattle ranch in the interior of British Columbia, Canada. Amidst the mountains, pastures, and fields of my family’s ranch, I was fortunate to live around horses. Yet no logical explanation accounted for why I was the only child in my family who had a heart-to-heart connection with these animals.

Later in life, after I began studying the teachings of Eckankar, I attributed my early familiarity with horses to spending previous lifetimes dependent on them for transportation and survival. I even remembered being a warrior in past lives and how horses had often saved my life.

When I was about two years old, Dad plopped me on one of our old workhorses. A photo of this momentous occasion shows me with a big grin and my legs sticking nearly straight out due to the horse’s broad back. I rode a horse by myself for the first time when I was about six or seven and loved them even more.

My parents, relatives, and our ranch hands recognized my deep connection with horses. When the adults attempted to round up horses or catch them, the animals must have sensed work would be forthcoming and ran away. At an early age, it often became my job to bring horses from fields into the barn area. I read their body language and could tell what they were going to do next. A twist of their heads meant they were plotting an escape by wandering off a path or running back to the pasture.

My affinity with horses continued throughout my teen years. To be with them as much as possible, I competed in rodeo events, where we worked as a close-knit team. Later, I entered hunter/jumper competitions where I rode a horse while jumping over man-made fences, galloping around a course.

That One Special Horse

Obviously horses were my passion, but one special 1,200-pound quarter horse became my favorite. Tubby was a 15.2-hand (a hand is four inches of height) chestnut sorrel with white socks and big blaze on his expressive face. He had personality plus. I thought of him as a little lunatic who always made me laugh. I would go to the barn on cold winter days to feed the hungry horses. While the others barely glanced at me, Tubby looked over his shoulder and made his eyes bug out like large, round saucers, as if to say, “I see you.”

During my later teenage years, while working at a hunter/jumper horse stable that was about five hundred miles and a ferry ride away from home, I sometimes felt too tired to go riding. But Tubby needed the exercise. So I’d take him to an indoor arena, and we’d play a game of tag. When he’d had enough, he’d stand behind a tall structure and avert his eyes from me. Instead of puffing, he stilled his breathing. It was as if Tubby had convinced himself that if he couldn’t see me, he was invisible too.

While the other thirty or forty horses at the stable would docilely obey commands, Tubby only complied occasionally. His independent personality was much like my own, and we forged a strong love bond. We understood each other in ways I’d never experienced with any other horse. But one memorable day, I was to discover that the spark between us marked a deeper, more spiritual connection than I had realized.

The story of my spiritual connection with Tubby starts with the fact that I prided myself on being a tomboy. As a Soul born into a female body this lifetime, perhaps subconsciously nostalgic for my warrior days, I desperately wanted to be male.

When about four years old, I remember trudging in the snow, frustrated that my tiny feet made it impossible for me to fill my six-foot-two-inch-tall dad’s footsteps. If only I could be like him, I thought.

I admired the unspoken camaraderie among men who rarely showed their feelings. At some point, I must have concluded that if I wanted to be like a boy, this meant I could never cry. I became determined to conceal any sadness or display of emotions so as not to destroy my carefully cultivated tomboy image.

My family, with three girls, were friends with another family that had three boys. Our parents always assumed there would be a marriage between at least one set of children to bring the families even closer.

By the time I turned sixteen, I had a boyfriend named Jess from this family. Our relationship, ever innocent, mainly consisted of the two of us talking in our living room. If Jess asked for a cup of coffee, I wouldn’t bring it to him. No way would I let myself be mistaken for a subservient girl. In turn, Jess’s idea of a romantic Christmas gift for his horse-loving girlfriend was a girth for my saddle.

When I was nineteen, in college, and living in the city, I visited home and went on a date with Jess. He introduced the idea that we should make our families happy by getting married. In fact, he insisted that we marry now—or else. We had a big disagreement, and rather than accepting Jess’s proposal, I chose “or else.” This ended our relationship that evening.

Upset and anxious about disappointing my family, I felt too emotional to go into the house right away. What if I cried while revealing to my parents that I’d broken up with Jess? Wouldn’t this destroy my total tomboy persona? The last thing I wanted was to have a teary-eyed fit for everyone to witness. Besides, explaining my breakup with Jess would make the tears flow even more. I might have what my girlfriends called an ugly cry.

Feeling restless, with my heart breaking, I drifted into our apple-orchard pasture, where the horses munched on apples. Tubby, hidden in the dark behind a tree, nickered to me. He walked out of the shadows until he stood close. Usually I would be the one who went to Tubby and singled him out of the pack. But this evening, he took the initiative and gently nudged me with his nose, as if asking what was wrong.

Tubby’s nearness and compassionate gesture prompted a release of the tears I’d been holding back. Normally, I talked out loud to horses about mundane things, such as my grumbling frustration that the cows had escaped our herding efforts. I’d never confided anything personal. But tonight I poured out my feelings of loss due to Jess’s ultimatum about marrying him now or never.

As I stood next to his right front quarter, Tubby did the most astonishing thing. While I leaned into his shoulder and sobbed, he nudged me again, curled his neck around my back, and hugged me. A blanket of love and caring surrounded me. Standing steadfast for as long as I cried, Tubby stayed patient, still, and accepting while giving his love and comfort.

Eventually I regained some composure and felt ready to return to the house. Tubby made a little sigh, yawned, and stepped away to go back to his apples and snoozing. I was surprised at how my sorrow had lifted. This beautiful, special Soul had been there for me when I most needed him.

From that night on, I was no longer limited to being a stoic tomboy. A horse had freed me from my emotional freezer and taught me that it’s OK to cry. I could more fully express all of myself, including my emotions.

With Tubby’s compassion I learned how a horse can give emotional support. He introduced me to a Soul-to-Soul connection. I gained the spiritual realization that there is a greater depth and caring available from animals than I knew was possible.

Gai’s story about Tubby is in two parts: