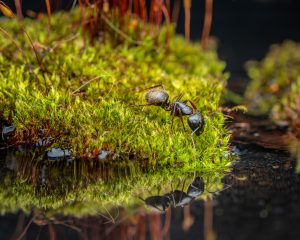 I am a member of the ECK clergy and was leading an ECK Light and Sound Service, an Eckankar event for the community. During the service I told a brief story about how I had noticed a small, lively, happy black ant crawling across the page of an ECK book I was reading from at home. At that time I smiled and thought to myself, There are over a trillion plus ants in the world, and this ant—in front of me—is probably the only one exposed to the writings of ECK.

At another point in the service, I had planned to turn to page 50 in an ECK book next to me on a table. However, somehow I turned to page 51 in the book I was holding. The book was The Road to Spiritual Freedom, by Sri Harold Klemp.

There in the middle of the page was a subhead: “Ants on the Move for Love.” This beautiful story tells how love and respect for all creatures can have surprising results.

Yes, even the ants have a voice in the worlds of ECK!

You are invited to reflect on the spiritual messages in this story by contemplating on this passage from The Road to Spiritual Freedom, by Sri Harold Klemp:

Ants on the Move for Love

A couple in Finland had a nice home. On the property were over three thousand currant bushes. Every day a colony of ants would march out to the bushes. The couple welcomed these ants going out there because the ants kept the vermin away; the vermin didn’t want all these little ants crawling all over and biting them.

The ants and the couple got along fine—except for one problem. In a direct line between the ants’ nest and the currant bushes there happened to be the couple’s breakfast table. And the table couldn’t be moved.

One day the wife talked to the ants. She said, “Could you please move your nest? I love you, but I don’t want to step on you by accident as we’re having breakfast.”

A couple of days later, she and her husband were sitting at breakfast and they saw the ants carrying their eggs and all their other ant paraphernalia. They were moving their nest. They moved yards off to the north where they would no longer disturb the couple at their breakfast table.

The woman realized that her request had gone to the group Soul, the group entity.

There is a group thought-form, perhaps like the Borg collective in the Star Trek series. It’s a group entity, and it runs all the Borg. There’s a similar group entity for ants, dogs, cats, birds, and everything else.

The wife had addressed herself to the ant group entity with love. And the ants took her request in the spirit of love and moved together. The group entity had said, “It sounds like a fair request. It’s done for the good of all of us. Pack up, move out.” So they loaded their Conestoga wagons.