A Hawk Offers the Call to Service 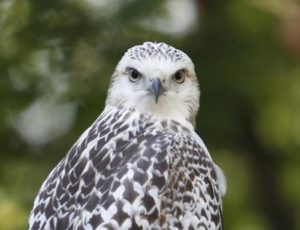 On a below-freezing winter afternoon, the heater in my car stopped working. I had intended to make a quick trip to a print shop before it closed. I would be meeting my friend Lawrence there so we could copy handouts for a conference we were coordinating. Now my car was too cold for me to drive in this freezing weather.

Asking for a ride isn’t something I ordinarily do. But through my decades-long study of Eckankar, I’ve come to trust these little nudges, my inner guidance, to help me with life situations. This time, my inner guidance was clear: I should call Lawrence and ask him to drive both of us to the printer. When I did, he kindly agreed to help.

After Lawrence arrived, he said that while coming to my house, he had seen what might have been either a hawk or an owl near the road. Even though Lawrence had slowed down to get a better look at the bird, rather than being intimidated and taking flight, it had stayed next to the curb. Its lack of movement made him think it might be injured.

Lawrence had spotted the bird around the corner and in the opposite direction of the print shop. Checking on the bird would delay starting our errand, but the nudge to do so was strong. We found the bird standing in the same spot where Lawrence had first seen it.

I do nature photography and volunteer at a local wildlife rehabilitation center, so I recognized that this was not an owl but a hawk. Not a bird that would linger for a long time on a city sidewalk, especially on a frigid day.

Now I understood why my inner guidance had prompted me to ask Lawrence for a ride. Coming from the direction of his home, he had seen the injured bird. I would have taken a different route to the printer. This hawk needed our help. Our errand could wait.

When Lawrence parked and rolled down his car window, the hawk limped away from the curb and onto a snowy field. Although very alert and aware of our presence, it still did not try to fly.

I called the Raptor Center, a University of Minnesota College of Veterinary Medicine facility that specializes in medical care, rehabilitation, and conservation of raptors—mainly eagles, hawks, owls, and falcons. The receptionist told me that the facility would close to the public at 5:00 p.m. It was now about 3:30. We would need to hurry.

We drove back to my house so I could retrieve my animal-rescue supplies and a large box. There was something unusual about this particular box: even though it had arrived as a package in my home several weeks before, for some reason I had not thrown it away. Now I understood why: the box was perfect for this mission. I also gathered several towels, sheets, and a pair of leather gloves that I keep in my car trunk for helping with animal emergencies.

We packed the box and supplies into Lawrence’s car and drove back to find the bird. But now it had moved out of sight. We followed the bird’s tracks until they disappeared. Then Lawrence spotted the hawk, partially hidden inside the hole at the bottom of an old cedar tree. The rest of its body remained visible above the snow.

Lawrence wrapped my towel around the bird. We put him inside the large box where I had arranged another towel on the bottom. I then removed the towel we had wrapped the bird in, as it was wet and full of snow. Carefully I brushed the snow off the hawk’s body and feathers.

When we got back to the car, Lawrence placed the box on my lap. Inwardly I felt the spiritual presence of this being and gently sang HU as we drove. Singing HU would help open me as a channel for Divine Spirit. I silently communicated to the bird that the situation was all in God’s hands. I kept wishing we had a flashing light for the car roof to transform it into a bird ambulance.

Even though we were in evening rush-hour traffic, we somehow got to the Raptor Center ten minutes before it closed. The staff met us outside the building and carried the box with the hawk inside.

We waited in the reception area to hear how the bird had fared. There, we learned that this was a rare rough-legged hawk. The veterinarian told us that it was only the second one of the breed he had ever seen. He explained that the rough-legged hawk migrated to Minnesota from the arctic circle during the winter.

The vet thought the hawk seemed subdued. He didn’t know yet if the bird had suffered internal injuries or a broken wing. He promised they would take an X-ray, examine the bird, give it something for inflammation, feed it, and then let it rest for the night.

Lawrence and I left the facility, knowing that the hawk would get excellent care. The injured bird might not survive, but we were relieved that it was in a safe place. It no longer suffered and was sheltered during these extreme weather conditions. The forecast for that night was for extreme temperatures and bitter cold.

As Lawrence and I walked back to his car, I noticed the area at the Raptor Center where twenty-three rescued eagles were being rehabilitated. To my surprise, one of the eagles called out with a piercing sound in our direction. Was the eagle thanking us? I felt its gratitude touch my heart.

The Call to Service

I called the Raptor Center the next day and learned that the hawk’s injuries had been too severe. But I felt grateful that the bird was loved and cared for before leaving this world. In its last moments, this Soul had known God’s love.

I am sure there are multiple things to learn from our experience with rescuing the hawk. I am beginning to unravel it.

Rough-legged hawks are one of the few birds that can hover over an area. A hawk has to change directions rapidly, depending on what it sees from having a clear overview of the terrain below. This injured hawk gave me an important spiritual lesson—to change directions, without question, when a Soul needs me.

Dealing with my broken car heater, spotting the injured bird, finding the perfect rescue box, and arriving at the Raptor Center before it closed were perfectly orchestrated and timed for one bird’s benefit. All life is precious.

I’m thankful to the inner guidance that helped me recognize when and how to answer a call to give service. On a cold winter day I had been guided to be a vehicle for aiding another Soul—an experience that is like nothing else.