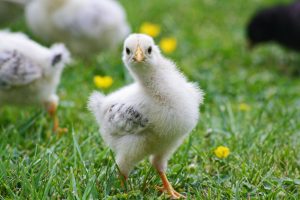 He decided to name them. One was Smart Chicken. Another chicken was First Flyer. And there was Brownie and Speckled Hen. These hens liked this boy; they were very tolerant of his affection. So sometimes he would give them a treat.

The little boy brought out his tricycle, hooked a little wagon to the back, put his little sister in the wagon with one chicken, and gave them a ride.

Speckled Hen rode on the handlebars. That was her special place.

When the boy began school, the chickens missed him. They would go over to the tricycle and look up at the handlebars. They couldn’t wait until he got home so he would give them a ride.

The same family also had a duck named Big Wig. It was a white duck with an iridescent purple-and-green head. But at the top of his head, cocked off to one side, was a white feather. Quite a dashing figure, this duck was. And he knew it. 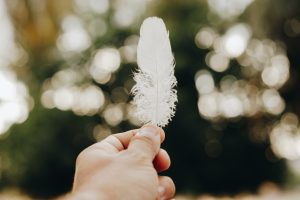 One day Big Wig started to molt, to lose his feathers. They fell all over the yard.

Sparrows and swallows began to take his beautiful feathers to build their nests. The duck got very upset. He ran back and forth across the yard, stretching out his neck and making an awful racket to drive away these thieves. This duck was very much like us people. He was hanging on to something he could no longer use.

Many parents are surprised by how easily their children respond to animals. They forget the good times their children may have spent with animals in previous lives and the intuitive communication—Soul to Soul—that often exists between children and animals.

Reprinted from Animals Are Soul Too!, by Sri Harold Klemp.

You are invited to reflect on the spiritual messages in this story by contemplating on this passage from How to Find God, by Sri Harold Klemp:

Detachment doesn’t mean a lack of emotional interest in life. It means that we are willing to take life as we find it, with the highs and the lows. Then yesterday becomes no more than yesterday, and we can look through the eyes of the child and say, What is here for me today?