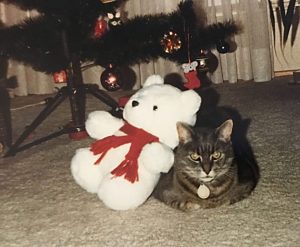 Sam seemed to be calm and mellow, but when our eyes met, he stood up, padded to the front of his cage, and started rubbing against the door. I reached my fingers through the bars to stroke his chin. He gave a soft meow and purred.

Something about Sam touched my heart, and my mind was made up: Sam would be coming home with us.

My parents and younger sister each had their own preferences, but after seeing how quickly I’d bonded with Sam, my parents acquiesced. Later that afternoon Sam went with us to his new home. 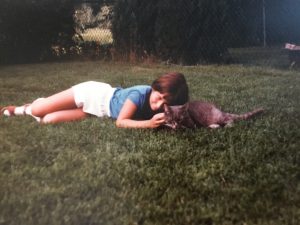 Soon, we all agreed that Sam had been a wonderful choice. He had a naturally warm, even temperament and was deeply affectionate. He not only tolerated, but enjoyed my sister’s efforts at play, even sitting still while she dressed him in doll’s clothes. He’d pad around the house in his lavender-colored cape emblazoned with an S like Superman’s.

I loved hockey, and soon Sam and I were playing our own version of the game. This involved little balls of rolled-up tinfoil (or occasionally pieces of his dry cat food nicked from the kitchen). I rolled them across our linoleum floor for Sam to chase after or to pounce on like a goaltender.

Sometimes at night, Sam slept at the foot of my bed. I delighted in these visits and our shared play. I loved Sam with a simple, unquestioning love of a child. 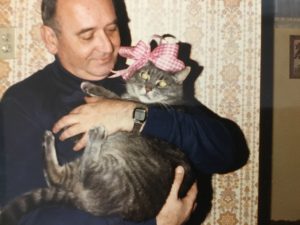 After a few years with us however, Sam got seriously ill and needed to be taken to the veterinarian. Knowing what this visit portended, I felt too distressed to accompany him. Before Sam left, I spent time alone with him in our basement, petting him and telling him through my tears that I loved him. While my parents and sister drove to the vet, I stayed home alone and cried for a long time.

My family wasn’t demonstrative. We did not discuss difficult feelings. Instead, we struggled through them alone. A gray pall settled over our home after Sam was put down. We all missed him terribly, but no one spoke about their sadness.

What made Sam’s loss even harder for me to bear was my childhood church’s teaching that animals are not spiritual beings. Not only was my friend gone from my life, but he supposedly had no continued existence. I would never meet him again, and the love between us was finished. While part of me resisted this idea, eventually I accepted it as part of what it meant to live my religion. Yet the thought brought me deep sorrow.

Years later I found the teachings of Eckankar and began to experience the miracle of spiritual healing via the dream state. At times, the Inner Master, an expression of the Holy Spirit in the form of my spiritual teacher, Sri Harold Klemp, would appear to me in dreams. He’d help me to recognize and let go of burdens I’d carried from the past, whether emotional or in the form of attitudes and beliefs.

While I no longer consciously grieved my loss of Sam, the Inner Master could see that I still needed a healing. When the time was right, he brought it to me via a special dream.

In the dream, I was walking with my wife along a white gravel pathway through a wide, tended lawn with numerous trees and small gardens, toward a beautiful building. It resembled an antebellum mansion of the southern US, but on a much larger scale. The pristine property exuded a hushed quality of sanctity.

Upon entering the building and passing through the foyer, we moved into a large room. There we saw a sight we had not expected. The far wall held several long rows of shelves. But instead of books, these shelves had hundreds of kittens resting on them. The kittens faced away from us, looking through a translucent wall behind the shelves. Every few moments, one of the kittens left its perch on the shelf and passed through the wall. We drew closer, and I saw the kittens were leaving by sliding down a chute through a dimly lit space that got darker the further down they went.

I puzzled over this until, in a flash, I understood where we were and what was happening.

I was seeing a jumping-off point for Souls who were ready to be reborn as kittens in the physical world. I deduced we were in the first level of heaven, the Astral Plane. The kittens here were awaiting the moment when their new physical bodies would be born. When it was time, they passed through the translucent wall to make their descent into the denser reality of the Physical Plane. There each entered its new body as it emerged from the mother’s womb.

The dream continued, and my wife was cooing over and cuddling some of the kittens. I marveled at the scene we beheld and understood these kittens were Souls, each on a spiritual journey of many lifetimes.

When their physical lives ended in death, the eternal and sacred part of them—their true nature, Soul—would return to this heaven for a period of rest and reflection, until it was time for their next step. Then they would come to this place, assume the astral form corresponding to their new physical body, and make the jump into a new lifetime.

The beauty and sanctity of our surroundings bespoke the great love and care with which this whole process was conducted. These Souls were deeply loved by God. Their journey was spiritually significant.

Pondering this, I had another flash of insight. I suddenly realized that Sam, my childhood pet, was somewhere in this building, awaiting his next rebirth.

The dream shifted. My wife remained in this room with the kittens, while I started to search through the building, excitedly calling Sam’s name. I came to a staircase and began to climb it. But when I reached the top, I was in the Soul body, a glowing orb of radiant golden light. Before me was another orb of light, tinged slightly green. From the high awareness of Soul, I knew this was Sam—in his truest form, as Soul.

In a wordless way, Sam and I communicated. Waves of light passed between us, carrying a pure expression of our love for each other and joy at our reunion.

In this place, we were free of the limitations we’d had when last together in the physical world. Sam had been in a cat’s body, and I’d had the body of a young boy. Here, I could understand and experience that Sam loved me too, with a love that, like mine, was born of the divine love God showers upon all Souls.

We were not different in this. As Soul, we shared a sacred love that continued beyond death. A love we shared in eternity.

After some time, I found myself still in the dream, but back in a bodily form and heading down the stairs. At the bottom, a man waited for me. I recognized him as Prajapati, the ECK Master who cares for animals.

I thanked Prajapati sincerely for this dream experience, saying how grateful I was for the gift of my reunion with Sam. He smiled and explained that, while it was now time for me to go, I was welcome to return to this place if I wished.

With that, I woke up and felt healed of a long-standing grief. I also had gained new insight into the depth and breadth of God’s love for Soul.

I now knew that God loves animals as much as we humans. Animals, too, are on a spiritual journey of many lifetimes. Most importantly, the love we share with them never dies.

—Photos above by Peter Skrivanic; photo below by John Villemonte

You are invited to reflect on the spiritual messages in this story by contemplating on this passage from ECK Wisdom on Life after Death, by Sri Harold Klemp:

When the physical body dies, the person takes up residence on the Astral Plane. It’s pretty much the same as here on earth, except the person may take on a younger appearance. But the personality itself is extinguished when that individual goes down the slide of reincarnation and comes back to earth.

This explains why you see your loved ones or even pets in your dreams after they have passed on. 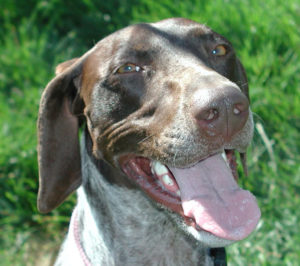 Have you seen a beloved animal companion in a dream after he or she has passed on?