Gratitude, Love, and a Miracle for My Cat 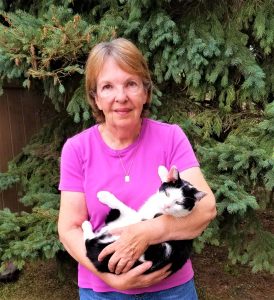 Love and gratitude became the “cat”-alysts for a miracle in my pet family. It all started with the arrival of a young, feral, female cat who, after weeks of circumspection, came in off the street to live with my daughter, son-in-law, and me. We named this tiger-striped, long-haired tabby cat Tyna—a name that was a little different from Tina and Tiny and other pets we’d cared for in the past.

At about the same time, a child from next door brought me a tiny white, short-haired kitten with patches of black on his head and sides. The boy had found this kitten abandoned in a trailer park. He placed the kitty in the palm of my hand. I could see the baby taking a little breath and feel the beating of his tiny heart. There was no question. I accepted the child’s gift.

I sensed this little creature would need to be strong to survive. I recalled the character of Tonto from the American television series The Lone Ranger, which aired from 1949 to 1957. Tonto and The Lone Ranger had been my favorite brave western heroes. I named the kitten Tonto. 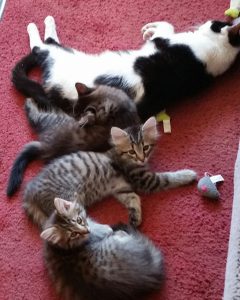 About eight months later, Tyna had a litter of kittens. Now Tonto and Tyna formed a pact. Whenever Tyna needed a break from taking care of her kids, Tonto would lie down and watch over them until Mama came back. He even helped her with bathing, cleaning, and playtime.

Lily-Baby, one of Tyna’s kittens with large, clear green eyes, has the heart of a nurse. If anyone in the family needs healing, she lies next to or on top of the person and sings a little purring song. She stays hours to days or weeks at a time, if necessary. My son-in-law can attest to Lily-Baby’s healing care. He was hit by a truck while riding his motorcycle, and Lily-Baby stayed close to him while he recovered.

Tonto must have sensed Lily-Baby’s potential even in her newborn days. He has always regarded her with great admiration and respect. In the photo of Tonto with Tyna’s litter, Lily-Baby lies next to him in favored position.

All was going well with our family of cats and humans, but then disaster struck. Tonto and our older cat, Brownie, a sixteen-year-old domestic shorthair, were outside the house one evening, when a huge hawk swooped from the sky and grabbed Tonto by the head with its strong talons. Brownie courageously gave his life defending Tonto.

When we found Tonto, he was barely conscious and meowing faintly. He had open wounds from the hawk’s claws and beak. Our veterinarian’s office is three short blocks from our home. We rushed Tonto there, carrying him in his transport cage.

After examining Tonto’s injuries, the vet shook his head. “We see this frequently,” he said. “This hawk carries a virus. Once it gets into the bloodstream of an animal, the prey will die.” The vet gave Tonto IV fluids to replace the blood loss and cleaned his wounds.

“That’s all we can do, unless you want to put him down,” the vet told us at the end of our visit. “There are no available medications on the market that will cure this. You’re going to lose him. I’m sorry.”

We thanked the doctor and carefully carried Tonto back home.

A few nights later, Tonto was clearly close to death. I sat in bed, holding him on my lap and feeling sad. Soothing him and myself, I sang HU quietly. HU is an unconditional love song to the Creator of all life. The high vibration, purity, and power of HU lifts me out of sorrow, anger, and disappointment into greater love, peace, relaxation, understanding, and acceptance of a situation. Singing HU keeps me walking on the middle path, neither for nor against whatever life is trying to teach me.

I continued the HU song, and oddly my heart filled with eager expectation. I began to feel grateful for Tonto and the way he’d lived in our family. Why not rejoice in the wonderful things he had accomplished in only a year and a half? I spoke to him lovingly. “Tonto, you are such a good, brave Soul.”

I thought about how, although his life would be cut short, he had learned a great deal about giving and receiving love. As a feral cat, Tonto had accepted love from the little boy who saved his life and the affection of his new human family. He had shown patience and kindness while helping Tyna with her kittens.

What Gratitude and HU Bring

Within moments of my gratitude spiritual exercise and singing HU, I felt a presence with us in the room. Identifying the inner appearance as Prajapati, an ECK Master who is known for working with animals, I whispered to a limp Tonto, “Prajapati is here.”

As if on cue, Tyna and her kittens rushed into the room and jumped up on my bed. The entire cat-and-kitten family began licking, kissing, and meowing to Tonto.

They so smothered him with their love that Tonto could barely breathe and initially resisted this jamboree. My daughter came into the bedroom then and saw Tonto was agitated. To help calm him she said, “Tonto, your Lily-Baby is here!” Then perhaps after gathering strength from this infusion of high-spirited energy, Tonto feebly lifted one foreleg and draped it over his favorite kitten.

I let the cat family continue their healing fest without interference. After twenty minutes of very loud, bouncy love and encouragement, the kittens jumped off the bed and returned to their own sleeping area.

Now in the bedroom’s stillness, and in the quiet inner presence of Prajapati, I noticed a dramatic change in Tonto. He was breathing normally again. He moved slightly. He even stretched a bit. Feeling free of sorrow, I began singing HU in a burst of thanksgiving.

By morning, Tonto had opened his eyes. He was able to swallow water from a medicine dropper. Day by day, over two weeks, he slowly recovered. Lily-Baby maintained a nearby vigil, licking him and sharing treats.

It’s been several years now since Tonto’s brush with death. He is happy and content with staying indoors all the time. The kittens have grown into full-size replicas of their mother and are much bigger than Tonto. He seems like a parent with grown children. He never lets them forget the importance of goodwill and sharing all that they have, especially food and toys. Lily-Baby is now a beautiful adult cat with a special light about her. She is still Tonto’s favorite child.

Tonto’s miracle healing showed me once again that singing HU lifts Soul into worlds of greater love, gratitude, and humility. Life changes before our eyes when the sound of HU is in our hearts. I am so grateful for the HU and the love of the ECK Masters.

This experience taught me that animals are Soul too. My heart has been opened so much. Now I even talk to my plants and thank my tomatoes before enjoying their garden-fresh sweetness.

You are invited to reflect on the spiritual messages in this story by contemplating on this passage from The Sound of Soul, by Sri Harold Klemp:

The quickest way to put your state of consciousness in the heart of God is to sing HU. Just sing HU to yourself a few times with love. You’ll notice that something changes.