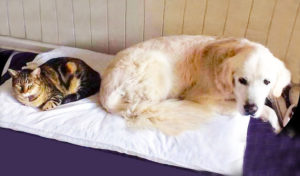 While listening to a track from the CD HU: A Love Song to God, featuring Harold Klemp, I felt drawn to a story about an ECKist who wanted outer confirmation of God’s love. On a walk in the woods, she’d stopped, closed her eyes, and asked, “Show me love, Mahanta. Show me love.” And then she chanted HU.

As the woman did this spiritual exercise, a flock of birds landed on a nearby tree. Responding to an inner nudge, the ECKist held out her hand, and one of the tiny birds flew over and landed on it. The strength and beauty of the bird’s love brought her to tears. A couple of hours later, she tried the spiritual exercise again, with similar results. Another flock of birds appeared, and again one of the birds landed on her hand.

I interpreted the woman’s experience as confirmation that divine love is around us all the time, like the air we breathe or the kiss of a gentle, cooling, afternoon breeze at the end of a baking summer day.

Could I Be Shown Love Too?

I often did building maintenance on a rural property about twenty kilometers (nearly twelve and a half miles) outside the town where I live in Central Queensland. While driving to work, I’d listen to the HU CD’s story about the bird and think, You never know; one day a bird might fly onto my hand.

Sometimes at this job, I saw a couple of Willie Wagtails on the property. They either sat on the yard fence or flitted about with their broad, fanned wings. Willie Wagtails are native to Australia, but sightings of them are on the decline. The black plumage on their upper bodies is accented by white bellies and throats. Small and friendly birds, they chirp their distinctive song while looking for insects to feast upon. When I was a young boy my mum used to say, “Sweet little pretty creature. Sweet little pretty creature,” in the same rhythm as their tune.

One morning, while I worked alone, I saw the Willie Wagtails again. I decided to experiment. I sang HU silently, gently extended my arm, and softly said, “Show me love, Mahanta. Show me love.”

A little disheartened at not getting the response I wanted, I nonetheless sent a wave of love to the little birds and went about my work. They continued to hang around nearby.

Later that same day, I ducked back into town to pick up more work materials. When I returned, the Willie Wagtails were still there. Occasionally throughout the day, I repeated the invitation “Show me love, Mahanta. Show me love.” But there was no response other than the birds’ normal song and flitting flight. Still, I smiled at being near and interacting with these little creatures.

A Cat Who Needed Love

At the end of the day, I packed up and headed home. After driving for a while, I exited into a pull-over area to do something about the noisy straps that were holding down materials on my truck. Their flapping was very loud and annoying while traveling at 100 kilometers an hour (62 miles an hour).

Two other vehicles were in the area where I’d parked. The drivers were noisy but eventually moved on. After they left, it became quiet, and I could hear a faint sound coming from the far end of the pull-over.

Could this sound be what I thought it was? My ears pricked up. I heard a distinct meow. In response, I called, “Meow.”

I finished adjusting my truck straps, then walked to where I thought the sound was coming from. I meowed and waited. Within seconds, a cat’s meow returned from further up in the long grass. I walked toward the sound, all the while, calling, “Meow.”

At the edge of the patch of tall grass, the meowing sounded closer. At last, a small, adolescent cat emerged and walked over to me. It was a beautiful, domestic short-haired, chestnut tabby with distinctive rust-colored stripes on either side of its abdomen. Relaxing into my arms, the cat began to voice a loud, continuous purr while I patted it.

I returned to the truck with the kitten in my arms. I didn’t have a box, so wondered where I could safely secure the animal. I decided to put it on the passenger’s seat, hoping it would stay there while I drove home.

After we started moving, the cat crawled to my gear-shifting arm and rested its tiny chin on my wrist. I left my hand on the gear stick to serve as its pillow. By then, the purring had increased to the loudest I’d ever heard. I instantly named the kitten Prrrby.

My wife, Gillian, is a veterinarian. At that time, her practice was located 950 kilometers (590 miles) away, in Brisbane. After arriving home I called her office to tell Gillian about the cat and seek advice. As she is verging on being a “crazy cat lady,” Gillian was delighted with the news, asked all sorts of questions, and requested photos. I put Prrrby in my bathroom, closed the door, and drove to the store to purchase items the cat would need.

During the next few days while I went to work, I kept Prrrby in the bathroom and called for the cat as soon as I came home. The moment I opened the bathroom door, Prrrby would tear out of the room and hide under my office bed. After a few days, though, Prrrby started greeting me at the bathroom door, purring loudly.

The next weekend after Prrrby entered my life, a friend came to my house to help me fell a palm tree. When we finished, I invited him in for lunch. I called Prrrby, and the kitten ran out gingerly.

With the cat in my arms, I walked closer to my friend—a quiet chap who would not have harmed the kitten in any way. Prrrby suddenly went feral. In an unexpected reaction, the screaming cat sprang out of my arms, raced around the lounge room and kitchen, climbed blinds and walls, and smashed into plate-glass doors. It took off down the hallway to my office and only settled down that night, well after my friend was gone.

Eventually I started letting Prrrby have free rein of the house in the evenings. At first, the kitten sneaked up onto the corner of my bed with me. Each night, it came closer, till at last it started curling up beside my shoulder and purring loudly while I went to sleep. I felt warmth within at the thought that I had been the vehicle to bring love into this animal’s life. Now the abandoned cat was returning love to me.

My job occasionally entailed working away from home for days. I couldn’t leave Prrrby alone for that long, so I arranged with Gillian to take the cat to her veterinary office on my next weekend trip to Brisbane. She would board Prrrby and try to find someone who wanted to adopt it.

Prrrby travelled well to Brisbane and then adapted amazingly to life in a vet-practice office. There, Gillian informed me that it was a she.

Prrrby proved to be an exceptional cat. She showed no fear whatsoever while living at Gillian’s practice. She walked up to dogs that would normally intimidate a cat and won them over with her loving presence. Gillian sent me a video of Prrrby cuddling up to Toby, one of her golden retriever patients, and luxuriating in the dog’s long, soft fur. To our relief, it was this retriever’s owner who eventually adopted Prrrby.

Many months later, when I was in Brisbane again, I sat at Gillian’s surgery, waiting for her to finish for the day. Her last patient came out the consultation-room door. The dog was a golden retriever, and a woman held the leash. After the lady paid her bill, she walked off with the dog beside her. Before they left the office, the retriever made a sharp turn toward me and pulled the woman in my direction.

I have an immense love for animals of all kinds, so it’s not unusual for a dog or cat to come to me. But this dog had abruptly approached me. Before I knew it, he had nuzzled his head between my knees. I felt loving warmth as I patted and cuddled the retriever. The woman, caught by surprise by her dog’s actions, gave us a few moments together and then decided it was time for the dog and her to leave.

Afterward, I told Gillian about the loving actions of this dog. She said excitedly, “That was Prrrby’s owner.” Then it dawned on me that Toby must have been thanking me for bringing Prrrby into his life.

My thoughts flashed back to the immensity of the simple request I’d made months ago. I’d asked, “Show me love, Mahanta. Show me love.” The answers to my request were far-reaching and not confined to being fulfilled in an instant or even in weeks.

I had been shown love.

Instead of a beautiful bird landing on my outstretched hand, a purring rescued kitten had crawled into bed with me at night and expressed her gratitude. And now Prrrby’s dog companion, Toby, had let me know he appreciated his new friend.

Prrrby helped me understand that if I take away limits of expectations, God’s love presents itself in totally unique and surprising ways on its own timetable. This love brings a profound sense of peacefulness that words cannot describe.