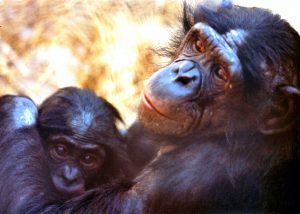 I transferred my graduate studies to a university where I worked with chimpanzees, bonobos, and orangutans, teaching them symbolic language and rudimentary computer skills. I soon learned that bonobos are very intelligent. One in particular, named Kanzi, understood hundreds, if not thousands, of spoken English words.

Those of us who worked on the animal-language project would form words and concepts by using a special keyboard with symbols on it. Kanzi would touch the keys to communicate back to us. I thought this was absolutely amazing.

The building where I worked was situated on sixty wooded acres with trails. My girlfriend, Liz, who also worked on the animal-language project, and I used to walk with the chimps on trails. We would ask the bonobos where they wanted to go. They would point at the symbol for one of about a dozen locations on the trails where special foods were kept.

Kanzi might ask to go to the tree house for bananas or to get some melon at the A-frame. Then he would lead us to his chosen destination. Along the way, we had conversations with him by using our special keyboard and sign language.

The campfire was a favorite spot for Kanzi. One day, we were sitting around the campfire—just two human beings and a chimp. I got an inner nudge to try a little experiment.

Kanzi shuffled over to my side.

Without using the keyboard or symbols, I whispered in Kanzi’s ear, “Why don’t you get a piece of ice and stick it down Liz’s back?”

Kanzi looked at me thoughtfully and got very quiet. Then he moved outside our campfire circle, sauntered over to the cooler, and opened it. Liz had heard my request to Kanzi but must have sensed this would be an interesting experiment. She sat still and didn’t say anything.

Kanzi reached his hand into the cooler. Then he circled behind where Liz and I sat, slyly looking in the opposite direction. Distractedly, as if he wasn’t paying attention to her, he slowly walked around the outside of the circle, until he was directly behind Liz, at a short distance. Suddenly he darted forward and shoved the piece of ice he’d plucked from the cooler down the back of her shirt.

Exceedingly pleased with his practical joke, he jumped into a nearby tree and started his distinctive, guttural, bonobo laugh as he enjoyed watching our reactions.

As much as I knew about bonobos and their capabilities, it surprised me that Kanzi had completely understood the social situation, the language, and our shared joke. With a human doing the setup, he had flawlessly followed through on the delivery. Even though Kanzi is a chimpanzee, he had planned his actions, laughed, and made a quick exit. His behaviors showed that he knew what he’d done was funny but likely to get him into some trouble.

Now I had witnessed Kanzi’s joke on Liz mimicking what people might do to one another. Were there other situations in which human and chimp behaviors were the same?

Why Do Chimps Sing HU?

A few years after Kanzi’s display of conscious awareness, I was telling a friend about my study of Eckankar. I mentioned its teachings on the benefits of singing HU, an ancient and sacred sound that can be heard within all creation. Then I remembered something I had learned during my work with chimpanzees. 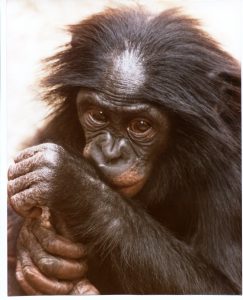 I pulled out the published book Jane Goodall had asked my professor to review, The Chimpanzees of Gombe: Patterns of Behavior. On the page facing the citation with the change we had suggested, I found a passage Dr. Goodall had written. She had observed chimps making a sound she called “the huu of puzzlement, surprise, or slight anxiety.” Chimpanzees sing “huu” repeatedly when they’re a little frightened. It seems to calm them. They sing “huu,” even when alone, if they enter a clearing, hear rustling in the bushes, and don’t know what it is.

And I thought, Isn’t that amazing? Chimps sing HU in some of the same kind of situations I do. How many times had I sung the HU for protection after a close call with my car or before doing something frightening to me, such as speaking before a group of people?

I have found to be true what Sri Harold Klemp writes in his book, Animals Are Soul Too!:

Some human beings think animals are so low on the scale of life that they could not possibly provide a suitable embodiment for Soul. But in Eckankar we know that animals are Soul.

And since they are Soul, they too need the love that HU can bring.