What Is a Lamb’s Life Purpose? 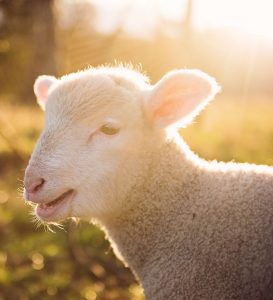 Bella, a lamb, was born on a cold March day in Minnesota. While her twin brother was large and robust, Bella was small and frail. The next morning, mother and son were doing well, but Bella was weak and cold. I carried her into the house, wrapped a blanket around her, then held her in my arms while telling her I loved her and that God loved her too.

When she was nice and warm I returned her to her mother, because if a lamb is away for too long the mother will reject it. That evening I found Bella lying motionless beneath the manger. I thought she was dead. She was so weak she could barely raise her head. I rushed her back into the house, where I used an eye dropper to feed her colostrum every fifteen minutes for the next three hours. By midnight she was strong enough to raise her head, and by morning she was standing on her own.

Now I faced a dilemma. A big snowstorm that would last for two days had begun. If I returned Bella to her mother, it would be very difficult for me to check on her as often as I needed to be sure she was nursing. She would thrive if I kept her in the house with me, but then her mother would reject her.

I decided to keep her in the house.

Her mother subsequently rejected her.

I fed her milk from a baby bottle, and she slept in a cardboard box for a few weeks. When she outgrew that, a “baby gate” was employed to keep her in the kitchen until the weather became warm enough for her to go outside.

But now Bella didn’t want to go outside. She liked living in the house with people. Two months of being a house pet caused her to have an identity crisis. Bella didn’t know she was a sheep. She didn’t even like the other sheep and wanted nothing to do with them. The other lambs were much larger than her and enjoyed butting her with their heads and knocking her down. She avoided them. Lambs lay down with their mothers when they sleep, so it was heartbreaking to always see Bella sleeping alone under a bush and grazing by herself far away from the others.

In midsummer I realized that another lamb was on its way. A beautiful July afternoon saw the arrival of a lamb so soft and white I promptly named her Cotton. Unlike Bella, who was very timid, Cotton was confident and bold. The two lambs quickly became friends, and Cotton began spending as much time with little Bella as she did with her own mother. She would run to wherever Bella was, graze with her, and then run back to her mother when it was time to nurse or nap.

Since Cotton was younger and smaller than Bella, she couldn’t knock her down when she butted her with her head, and Bella began to playfully butt Cotton in return. Soon they were playing together, running and leaping into the air just for the fun of it, the way lambs do. Cotton was teaching Bella how to be a sheep.

By November it was time for Bella to go to her new home. She, along with her mother and two others, went to live with a nice young couple who wanted to keep a few sheep as pets. It was soon after this that Cotton’s health suddenly deteriorated, for Cotton had been born with a deformity that made it extremely difficult for her to relieve herself. She became weak and stopped eating. I tried feeding her by hand, but it was no use. She was dying.

When I found her near death one night, I carried her into the house and placed her on a soft towel in the kitchen where Bella had been raised. This beautiful little Soul had brightened the world, and it filled me with grief to see her life end so soon. I felt she deserved a long and happy life. I turned on the HU CD for us to hear. I sat with her, crying, petting her, and telling her how much I loved her, until 3:00 a.m.

After Cotton translated (died), I fell asleep and immediately had a dream about her. In the dream the two of us were walking together along a beautiful, quiet, two-lane road lined with lush green grass and colorful wildflowers. Cotton walked just ahead of me, happily sampling grass and flowers along the way. When we reached an intersection she suddenly darted into a left-turn lane and walked along a different road. I could only stand in the turn lane and watch her go, but I could see her continuing to graze as she quickly went on her way. Cotton knew exactly where she was going, and she was fine.

When I awoke I understood that this had been the plan all along. Little Bella, who began life as a house pet, was supposed to live this life as a sheep, but she didn’t know how. Bella’s good friend Cotton then came along to help her learn what she needed to know—how to be a sheep. With this accomplished, Cotton had fulfilled her mission and was free to return home.

I was grateful for seeing this and helping these two friends as much as I could. Cotton helped me, too, because she reminded me to see how easy it is for us to believe that a life has been wasted, or has ended too soon. Sometimes a life’s full purpose is achieved in a very short time.

Not long after that I happened to run into the young couple who adopted Bella and her family. They assured me that the sheep had a very good home, and the man shook his head and added, “Especially that Bella.”