The Miracle of a Cat Named Kimba 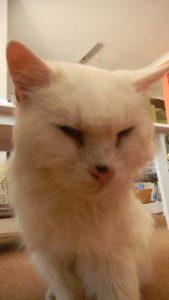 When Jason and I got married, I had five cats—all from rescue homes, and all pure white. Unfortunately my husband had allergies, which meant that certain rooms were out of bounds for my furry friends.

The years passed, and my little companions eventually reached old age. One by one, they moved on to the higher worlds, until only Kimba was left. This gave him special privileges, such as being allowed in the lounge.

When Kimba turned nineteen, my husband was in his second year of chemotherapy. I would often hear Jason talking to Kimba. The cat sat at his feet, looking up at him and listening intently. Jason’s conversation with our cat always had the same theme: “Well, Kimba, whoever is the last man standing needs to be around to take care of Mum. It’s between you and me, mate. Stay strong. Make sure she eats and sleeps on time.”

After another year we took Kimba to the vet, as the cat seemed to be getting a bit arthritic. The vet gave him a thorough checkup, but the diagnosis was poor: “Yes, he has arthritis, but also his liver is failing. His kidneys have shriveled up. He has a respiratory disease, two tumors on his spine, and gingivitis. His teeth need to be removed, his heartbeat is too fast, and his body temperature is too low. The best thing is to let him go.”

Oh, I was not ready for this! Through the tears, my plea to Jason was, “But he hasn’t told me that it is time!”

So my gallant husband appealed to the vet. “Is there something you can give Kimba to relieve his pain until Deborah can come to terms with it? He is the last one.”

“I can give him one injection that will reduce his pain for a couple of weeks. But then he’ll have to be put to sleep.”

Twelve days after our visit to the vet, it was Jason who walked into the Light.

After Jason’s death, it seemed apparent Kimba was keeping his end of the bargain with Jason and looking after me. He would lay sleeping at my feet in the evenings. Every now and then he got up to move around. But near 11:30 p.m., he would sit up and meow, telling me it was bedtime. He’d wake me at 7:30 a.m., pacing noisily, his purr sounding as if he was talking.

Over the following month I rearranged the lounge furniture, which involved moving Jason’s chair to the opposite side of the room. Our armchairs, both black leather, had an identical smell. Yet I’d often find Kimba sitting in front of Jason’s chair, listening, as he had done when my husband was alive.

Three weeks after Kimba had started exclusively sitting by Jason’s armchair, I took him back to the vet. After the examination the vet remarked, “He is doing tremendously well for his age. Everything is working as it should. Other than a skin cancer on his nose, he has a clean bill of health.”

“But what about the arthritis? His tumors? His kidneys?” I asked.

The vet consulted his previous report and diagrams and reexamined Kimba. Looking extremely puzzled and a little embarrassed, he admitted, “I don’t understand it. There is no sign of tumors. His kidneys and liver are normal and function well. Pulse and breathing are a bit fast but obviously doing the job. The teeth and gums are OK for his age. No sign of pain in his back legs, nor any sign that his body is going into shock.”

The Blessing of Kimba

Kimba was with me for another ten months. Each day he sat where my husband’s feet used to be, looking up at the empty chair and seeming to listen intently.

The vet had ended our appointment by saying he didn’t understand. But I think I do, at least partially.

This miracle cat, my treasured little friend, who was such a great comfort in my sadness, was a very real link between my wonderful, beloved husband and me. I feel so blessed for this experience and the two Souls who showed me that love truly has no boundaries. They allowed me to glimpse beyond the curtain of the physical world. Only the ECK, Divine Spirit, could have given me such an incredible gift. I thank the Mahanta, my inner spiritual guide, for this amazing blessing.