This story is about “Carol.” She lives in cattle country, in a small town near San Angelo, Texas.

One morning Carol went outside. Her neighbor was outside too, and on his lawn were three bulls. One was a huge longhorn, and the other two were little black bulls. 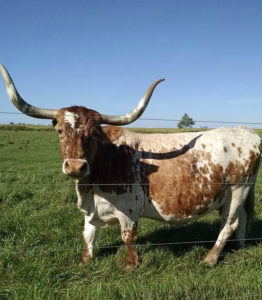 Unfortunately, one of them was lying down. He had eaten too much of a big green bush, and he had become bloated. Now, those of you who work with cattle know that if an animal becomes bloated, if it can’t get up, then it probably won’t make it. It’s going to die.

We knew that at home on the farm too. If there was such a case, the wives would get on the phone and call up the immediate neighbors right away, because maybe one farmer or another knew what to do.

A bloated cow looks really different, like a big balloon lying on the ground with legs sticking straight out. It’s a strange-looking thing.

There’s no way to get a cow like that up most of the time, because they’re just too big. But there was something that sometimes worked. Farmers always carried a jackknife. They carried it everywhere for everything. So the farmer would take the jackknife and poke it in a certain place around one of the ribs. I was just a small kid when I saw them do it. The air went out of the cow just like a balloon, and then the men got her up. They would kick her, just enough to get her moving. Then there was hope.

But, apparently, they didn’t know about this in Carol’s town. So Carol and her neighbor, “Don,” looked the situation over, and they didn’t know what to do. Don got on his phone, and he called around trying to find the owner. He couldn’t find the owner, so finally they decided they should call the sheriff. Maybe the sheriff would know something. About this time, the longhorn bull walked over to Don.

Now, these are huge animals. From my experience on the farm, all our bulls weighed well over a ton, and you did not want to be anywhere near them. But this bull came up to Don and looked very concerned. Don scratched the bull’s head. And then this massive bull walked over to Carol and began to lick her arm.

Whenever Don walked over to look at the little black bull that was down on the ground, this huge longhorn would follow him. Don said to Carol, “Do you see that? Every time I go over there to check on the bull, the longhorn comes right along.” This was quite unusual.

Well, the longhorn decided that Don and Carol weren’t going to do anything. So he tried to get his horns underneath the downed bull and lift him up. But he could only get one horn at a time under the little bull, because longhorns’ horns stick straight out to the side. And they don’t curl much to speak of—at least not the ones I’ve seen.

They got this bloated little thing up on his feet, but he was just standing there. It hurt to walk, I imagine. Then the longhorn stuck the little bull with his horn and kept sticking him, sticking him. Apparently that hurt worse than the bloating did, so finally the little bull began to move. Pretty soon the air passed through, and he was OK. It was the love of this huge longhorn for his little friend that ultimately saved his life.

Here again is an example of divine love showing itself, animal to animal. And of course, Carol and Don did their part.

Love does not restrict itself to only those of a certain species or race, or any of that. Love is love. And this is what the ECK teachings are all about. Purely love, and just love—simply love.