My Playful Horse Becomes a Love Dog, Part 2 of 2 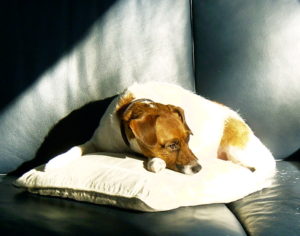 —Harold Klemp, Animals Are Soul Too!

As a teen and young adult, I had a favorite horse named Tubby. He was a lovely sorrel quarter horse with a big white blaze and four white socks. He had a mischievous personality and often made me laugh out loud at his antics. I learned from experience that Tubby chose to give me his unconditional love when I needed it most.

Years after Tubby left this world, my husband and I considered having a small dog join our household. I began to have dreams of what this Soul might look like. A slightly shaggy terrier kept appearing in my dreams. Eventually we decided to look for a Jack Russell terrier puppy.

I learned there were two litters of that breed in the area where we lived. They would be ready for viewing when closer to adoption age. As soon as possible, I visited one of the litters. One puppy caught my attention—a little white-and-brown female who sat on my feet and wouldn’t move away.

I asked for inner guidance to know if this was the puppy for us. I understood the answer I received to be a yes. We brought the puppy home and named her Cricket.

I expected Cricket to whimper and miss her dog pack, but even on the first night away she did not howl for them. She regularly made us laugh at her hilarious behavior. For a terrier, a breed known to be independent, she was quite agreeable and easy to train.

Long before I knew about Eckankar’s teachings on reincarnation, Spirit had a unique way of helping me recognize people I had known in past lives. A person’s face from another lifetime would seem to float over the top of the current face. When the past and present eyes synced and matched, it became my sign that this was the same Soul from a previous life returned in a different body.

One evening, near dusk, when she was a year old, I walked with Cricket in an oak forest where dogs could be off-leash. She had been exploring, so after calling her, I turned to watch her running toward me. I nearly fell over with surprise at what I saw. Spirit showed me the truth about Cricket.

I looked at Cricket and saw Tubby’s face slip over hers. Their eyes matched. This was Tubby, returned.

Suddenly, all sorts of puzzle pieces slipped into place.

Although the Soul who had been a horse was now a dog, Tubby’s sense of humor and wacky personality had carried over. I used to flap a jacket at Tubby on occasion to get him to run when he was lazing about. Big, baggy jackets inexplicably spooked Cricket. Tubby adored apples; so did Cricket. The horse and dog had similar coloring, although Cricket had more white fur than Tubby. Cricket had the same funny little roan marking on her hip that Tubby had on his hip, and so on.

Like Tubby, Cricket innately knew how to give unconditional love. My husband had been diagnosed with a chronic illness which caused pain to move throughout his body. He would get home from work, feeling tired and sore, and lie on the sofa. Cricket would hop up and stretch out full-length on his torso, her head by his chin. After a short rest, he’d always feel so much better and often wondered how Cricket knew that he needed her love.

Cricket could sense when other animals or people were distressed or in pain. We had a lovely friend, Ruby (“Auntie Ruby” to Cricket), who lived in a high-rise. When we went to visit, Cricket knew who we were going to see and raced out of the elevator, down the hall, and around the corner to the correct apartment door. Ruby had arthritis and was often in pain. When Cricket visited, she showered her wiggly love and affection on Ruby, making her pain less noticeable.

Another time, we went to visit friends who had small children. Cricket loved little children and liked to play for hours with them. Although lots of people were at this gathering, as usual Cricket stayed with the little ones.

At one point, our hostess, Belle, answered a phone call and was gone for quite a while, having a conversation with the caller. When she returned, Belle was uncharacteristically quiet. Politely, no one questioned her, as the lively party flowed on.

After Belle sat on the living-room couch, Cricket quietly left her fun of playing with the children. She purposefully walked across the room, stationed herself at Belle’s feet, leaned into her leg, and let our friend casually stroke her head for the rest of the visit. I knew that Belle also loved Cricket, so I didn’t think much about our dog’s expression of affection.

Later, we learned that our hostess’s phone call was from someone whose husband had just been diagnosed with inoperable brain cancer. Belle had been very upset and near tears at the news. Somehow, Cricket sensed this and gave love and comfort in the best way she knew.

Over the years, not only my husband and I, but also our families and many friends called Cricket a love dog. I learned from her that the unconditional, healing love from animals also transcends the borders of time and death.

Gai’s story about Tubby and Cricket is in two parts: