A Town Slows Down to Save an Echidna

Jul 20, 2020 | All Kinds of Creatures, Animals in Nature, Contributors, Service and Animals | 7 comments 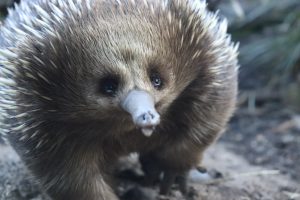 Many people declare their love for animals. But how do they show this love in everyday life? In my country town of Kilmore, Victoria, a spiritual community of love formed spontaneously to save a tiny creature.

One morning, during peak-hour traffic, I drove to an early appointment through our rural town. It’s a one-main-street town with side streets that contain shops and cafés. It’s also the major thoroughfare for commuters traveling from Kilmore and other small towns north of us into the “Big Smoke,” which is what we country folk call the city of Melbourne.

At nine in the morning a lot of commuters drive south, and many “tradies,” (Aussie-speak for “tradesmen”) travel north. They’re usually in a hurry to get to their jobs, and I always feel the busyness of folks in gear, with things to do.

In the distance, I noticed a wee blob of brown near the side of the road. An oncoming vehicle blinked its lights at me. I didn’t think much of the signal, except that maybe the driver was warning me of a police speed trap nearby. But he was trying to tell me I was about to see a rare sight.

As I drew closer, I identified the wee brown blob as an echidna, also called a spiny anteater. Found only in Australia and New Guinea, typically echidnas live in isolated forested areas or deserts, where they feast on ants, termites, and beetle larvae their long tongues scoop out of logs. Because echidnas are notoriously shy, it was highly unusual to see such a creature anywhere, much less trying to cross a busy small-town street.

I slowed down my car and listened to the inner guidance from my spiritual guide, the Mahanta. It came as a gentle, quiet nudge to brake, stick my hand out the car window, and signal for oncoming traffic to stop. I immediately did so.

While my car came to a full stop, traffic began to pile up behind me. I watched the echidna slowly waddle past the front of my car and make its way across the road to the other lane.

In the other lane, a tradie drove toward the animal and me. Although probably in a hurry, he stopped his vehicle and patiently watched the slow-walking echidna cross his lane as well. Behind the tradie in his lane and me in mine, backed-up traffic now began to mount.

What Would People in a Hurry Do?

To my surprise, at no time did the people waiting behind us become disgruntled, even though we’d kept them from continuing on their journeys. Throughout those moments, no horns blared, no angry gestures were made, no voices were raised.

It felt as if all time had stopped. Only love was in motion.

After a full five minutes, the echidna made it off the road, and life went on.

But I had received a gift of divine awareness. I consider this experience to be a blessing from Spirit. It came from listening to my inner guidance and acting upon it immediately. This showed me that what I do in any given moment affects others around me more than I might think.

I thank the little echidna who bravely crossed the road in morning traffic for giving all of us busy humans a chance to love.