A Lost Calf and a Powerful Spiritual Lesson 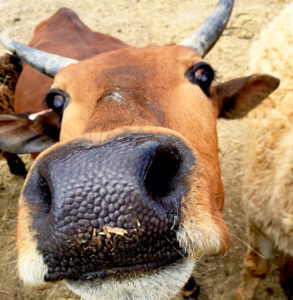 My partner and I visited a cattle ranch owned by a friend who had been farming the same land for over thirty years. I rarely visit a farm and soon realized this was no ordinary place. The farmer kept it because he loved cows. He felt responsibility toward each cow and calf. He knew their lineage, their health, their temperaments.

He invited us to go with him to check on some of the cattle. We jumped on a four-wheeler with nutritional feed on board and two dogs chasing close behind.

It was birthing season, with calves taking their first steps and first feeds. They were establishing essential connections with their mothers and herds.

Each herd of about ten cows, ten calves, and a bull was separated from the others by a few paddocks so they wouldn’t interact. When we got to the first herd, there was a strange commotion. A second group must have broken free from its paddock and made its way to this herd.

The bull in one group wanted to get across the fence to check out cows in the other herd. His huffing and puffing made it clear that we had to move one of the herds to ease the tension. With the help of the two dogs, we rounded up the cattle and got them to a distant paddock. 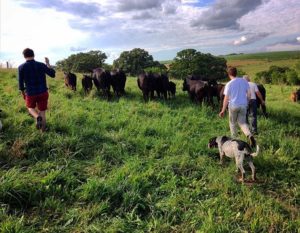 After separating the herds, we finally made it back to the first group and did a head count. There seemed to be one extra young calf trying to find its mother. It moved from cow to cow, attempting to latch on their udders, but each cow shoved it away. We wondered if we might have accidentally separated this calf from its mother when we moved the second herd.

We raced back to the herd we had moved to see if it was missing a calf. But all cows and calves were accounted for. So where had this other calf come from? What to do?

It was getting late, and a dark storm was brewing. We returned to the farmhouse to get colostrum. The calf wouldn’t survive for more than twenty-four hours without this food.

By the time we made it back to the paddock, the calf was missing. We looked everywhere, but it seemed to have disappeared.

We began to search the other paddocks and nearby forest. The farmer called out mooing sounds. I feebly tried to mimic him. All the while I chanted HU, a sacred sound, and Prajapati (the name of a spiritual master who works with animals). I asked Divine Spirit for help. I pulled out every tool in my “animals-are-Soul” tool kit.

The evening drew on, and soon enough it was dark. With no other option, we retired to the farmhouse without our calf, wondering whether it would survive the night.

At 2:30 a.m., my partner and I suddenly woke up to the sound of a wild storm. My partner’s first thought was, Is the lost calf going to be OK?

Sadly and strangely, my first thought was, Am I going to be OK?

I wasn’t questioning whether we would survive the storm; I was thinking about the preceding couple of weeks. Something had been troubling me. I asked for insight into the situation and help to release it. The storm had awakened me to my heavy heart. I felt the heaviness was connected to the relationship with my partner, and I didn’t know what to do about it.

The next morning we left the farm without having found the calf. We had to get back to town, so we left the farmer to continue his search. The heaviness of my heart continued throughout the day, and it wouldn’t leave.

We finally made it home, and I took a quick nap. When I woke up, I sat in contemplation and sang HU, looking for guidance about what to do.

My inner guidance nudged me to talk to my partner, but I was afraid. I didn’t know where this fear came from, as I had always been able to speak with him. I was telling myself stories about him not being able to understand me. As it turned out, these stories were remnants from past lifetimes.

Now I only wanted to run away from the situation between us. That would have felt a whole lot easier than a conversation. After two hours of despair, I found the courage to talk with him. He listened with much love and care—the same response of total, unconditional love he’d always given to me. Finally I found peace in my heart again. His enormous capacity to listen and accept me for who I am lifted the pain in my heart.

We held each other. At that exact moment of deep understanding, we received a text message from our farmer friend: “We found the calf.” The farmer also sent a picture of himself hand-feeding the calf in the barn.

In that instant, my heart exploded with a love unlike anything I’d felt before. I was filled with love and relief that the calf was OK.

A Mirror for Me

When I’m in out-of-the-ordinary situations, such as being a city slicker rounding up herds of cattle, I look for how Divine Spirit is speaking to me. These times are like a waking dream where every moment and experience has spiritual significance.

Later, in contemplation, I understood the connection between the calf and me. Somehow the calf was a mirror, showing me an aspect of myself. When the calf had not been able to find its mother, it buried itself under a bush in the forest and waited out the storm.

I recalled lifetimes, including this present life, during which I, like the calf, had experienced abandonment. I too had buried myself under a bush to be safe or to escape pain. Whenever things got difficult for my heart, I’d found it easier to run away rather than speak up for what I needed.

Like the farmer, Divine Spirit had never given up on me. The farmer had told us that he would never desert his cows. He would do whatever it took to find the lost calf.

This is exactly what the Mahanta, my spiritual guide, has done for me. He acts as a pure channel for divine love to protect and guide me. The Mahanta had answered my inner call for help. The situation with the frightened calf had revealed in me a pattern of responding with fear. Like the farmer with the calf, the Mahanta hadn’t given up trying to help me.

I believe that those most dear to us often, consciously or not, convey gifts and blessings from Divine Spirit, from the Mahanta. My partner’s love and willingness to listen to me without judgment had helped pull me out from under the bushes and let me know that I would be OK. The Mahanta’s constant presence was reflected in the relationship with my partner.

The calf helped teach me another very powerful spiritual truth. The abandonment in past lifetimes had left residues of a belief that I was a victim. Yet there is no place for victimhood as we reach for higher states of consciousness.

The calf had never actually been abandoned. It had unknowingly wandered off from its mother to follow the herd. Later, it couldn’t find its way back.

In the past I had chosen to always stay a little separate from others as a way of keeping safe. Yet I’d never been abandoned—only afraid of being lost. Through the gift of this precious calf, I was able to see other dimensions of myself and my reactions to life and release them.  I am no longer trapped by the false illusion of abandonment or the fear of being lost.

I am freer to face life and share love with others.  I now have the spiritual freedom to acquire courage to speak up and face difficult experiences.

Has an animal served as a spiritual mirror for you?