HU and the Young Barn Owl 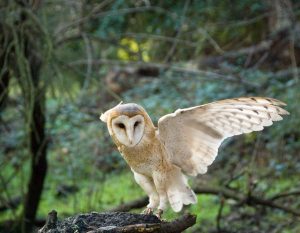 I was taking a photo workshop at a nature center that rescues injured wild animals. If the animal can be treated and completely healed, it is released back into the wilds. If it won’t be able to survive, it can live out the rest of its life at the center.

The center is open to grade (elementary) and middle schools for youth to learn about animals. It’s also open to small photography workshops. The classes are small, with eighteen participants maximum, split into two groups of nine. Handlers bring out two animals at a time, so each group gets to photograph an animal, and then they switch to photograph the other one.

The barn owl they had been bringing out for years for these classes became quite a star. He loved to pose. But he’d recently died. So this day, the handler brought out a new, young barn owl. It was his first time in front of a crowd.

He seemed terrified, tucking his head down and turning away from the photographers. Everyone else in my group moved over to the side, trying to get a shot of his face. They clicked away like crazy, moving in closer and closer to the frightened owl.

I moved to the opposite side of the group and sat down. I placed my camera in my lap and silently started singing HU, a sacred song of love to the Creator. Inwardly, I told the owl that he is Soul, he is loved, and he is beautiful.

After a few minutes, the inner voice of my spiritual teacher told me to take my camera off my lap and raise it. As soon as I did this, the little owl turned toward me. He lifted his head, looked me straight in the eye, and spread his wings. My camera captured this eternal moment of Soul meeting Soul.

And the little barn owl captured my heart.

You are invited to reflect on the spiritual messages in this story by contemplating on this passage from Animals Are Soul Too!, by Harold Klemp:

If times are hard for you during the day, you can spiritualize yourself by singing HU (pronounced like the word hue), an ancient name for God.

Sing it on a long, drawn-out note. But sing it with love for God. It’s a simple prayer song that will lift you and help you through.

Singing this ancient love song to God will help you to become a better person, in all ways and in all places, for all beings.

When you sing HU, you agree to let Divine Spirit do what is best for you.