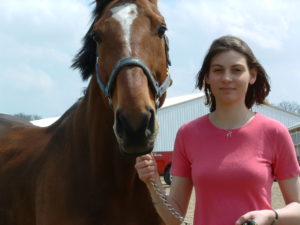 One of my grandfather’s greatest passions was to raise and train horses. He loved horses, though none of his children or grandchildren did. That is, until I came along. When my mother was leaving for the hospital to give birth to me, he said, “This one is my last chance. This one doesn’t get a vote.” He warned that I’d better like horses. Luckily enough, I did, very much.

When I was twelve years old, Papa, as I called my grandfather, bought a horse for me to learn to ride. The beautiful Thoroughbred named Mel came at a bargain price. He was tall with a dark-red coat and black legs, mane, and tail. He had a big white star on his face.

Mel had been a racing horse and afterward was trained as a hunter/jumper. He had suffered significant emotional and physical trauma. A long, inflamed scar trailed across his back leg. If left alone with people, he paced with stress and anguish. Seeing Mel’s discomfort, I decided to love him unconditionally, hoping he would learn to accept it.

Mel sometimes hurt himself further while trying to compensate for his leg injury. For a human being, a physiotherapist can say, “Just work through the pain. Trust me. I love you. You’ll get through this.” I didn’t think I could say that out loud to a horse. So through years of patience, persistence, and love, I had to prove to him that he could rely on me.

Eventually we found a new trainer who was able to work with Mel. The trainer helped Mel overcome his distrust. He began to believe that doing the exercises we asked of him would help remedy his issues.

The inflammation on his leg decreased, and his flexibility returned. Over time, Mel and I bonded and became a cohesive unit.

The barn where Mel stayed was quite far from the house, and I always needed a car ride to get there. My parents, under the tremendous stress of coping with all their obligations, weren’t able to take me there often. In addition to this challenge, I was also involved in high-school extracurricular activities and trying to get ready to attend university. My heart broke at not being able to work with Mel as much as he needed. My trainer didn’t have time to work with him either. Mel’s lameness returned from lack of strategic, consistent exercise.

I felt like I’d been letting down my best friend. For several days I contemplated on the problem and asked for help from the Mahanta, my inner spiritual guide, and the ECK Masters. These are ancient spiritual teachers who can give assistance when people ask for help. Sometimes, they appear in a dream to answer questions or offer suggestions.

One night, a dream warmed my heart. I saw myself standing in the indoor arena where we train our horses. ECK Masters Rebazar Tarzs and Kata Daki, accompanied by a gentleman I didn’t recognize, were with Mel. Kata Daki led Mel in a very gentle exercise. She stood in the middle of the arena, with Mel on a lunge line; he pivoted around her in a circle. All three were working with Mel during the dream. By the time they’d finished, his back leg looked great, and he was moving beautifully.

I woke up the next morning and thought, Well, that was a nice dream. Too bad it couldn’t be a reality. Again, my sadness returned at the thought that I had let Mel down.

Then I got a call that afternoon from the barn manager and trainer. She said, “I let Mel out today. I don’t know what happened, but that horse is moving like nothing is wrong.”

She explained she had noticed the day before that Mel looked extremely lame. “Now,” she said incredulously, “there’s nothing wrong with him.”

She and I then started trying to find logical explanations for the horse suddenly, miraculously being able to move without issues. We speculated: It had been muddy. Maybe Mel went to the paddock and rolled in the mud. The mud caked around his leg. Mud brings down inflammation, doesn’t it?

But inwardly I knew better.

Over the years, I observed more of Mel’s unique nature. He was a big, strong, very smart horse who could be intimidating at times. I’d learned to either sing songs or speak kind and encouraging words to relax him if he became agitated. I’d even sing 1960s Motown love songs to him. But HU, the love song to God, resonated the most with him. HU is love—the language of life. It can bring a feeling of peace.

Mel responded to the spiritual help he received. We had gotten this horse for a rock-bottom price. Olympic-level riders told me he would be impossible to revitalize and was even dangerous. But this horse became a success story—full of love and self-confidence. 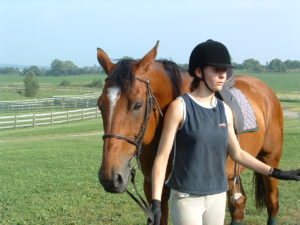 Shortly after I left for university, Mel competed at the national level in dressage. He entered the arena with pride, happiness, and the joy of living. And he won gold.

This distrustful, skinny, abused horse became a fat, happy “cuddle bunny.” Another rider at Mel’s barn hired a pet psychic to communicate telepathically with him. She said Mel told her he used to think people were instruments of torment for horses. But then a young, tall girl with long, dark hair came along and showed him that people are capable of love.

The spiritual healing with Mel opened my heart too. He taught me that no matter what challenge I face, the ECK will always support me. I learned from Mel to never put limits on my expectations. And without reservation, to open my heart to the possibility of miracles.