An ECKist named Debbie was trying to console an elderly woman named Jeanette who was grieving the imminent passing of her brother. Debbie told Jeanette about a special dream with her dying cat.

In Debbie’s dream she whispered to her dying cat, “It’s OK to let go. When you do, you’ll feel like a kitten again.” From her tiny cat body sprang a four-hundred pound tiger who jumped clean over Debbie’s head and landed on the other side. 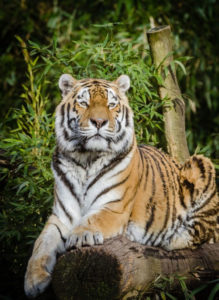 Debbie shared her understanding. That little cat had been bossing the family around her whole life. They had been thinking she was just a little cat. She was thinking she was a tiger. And when a four-hundred-pound tiger wants something done her way, you do it. When the tiger wants food, well, let’s hear that can popping. That’s how the cat ran her life. So when the time came, and she left, there she was, back in something more familiar—a skin she understood.

Well, Jeanette heard this story. She liked it. Debbie said to her, “When we leave our sick, old bodies at death, we go back to who we really are: eternal, brilliant, happy Souls.”

At this point, Debbie knew it was time to tell her about HU. She said, “There is a word used since ancient times to help people who are grieving, sick, and in need of peace. It helps us connect our hearts with the heart of God.” Debbie showed Jeanette how to sing HU.

Now Jeanette’s face was positively shining, and she said, “I’m going to sing HU all the way to the nursing home.”

Adapted from The Master’s Talks in A Year of Spiritual Healing—2014–15.

Has a dream about an animal helped you understand more about the true nature of people and animals, as spiritual beings? If you would like to get better at remembering your dreams, consider trying the spiritual exercise below.

A Spiritual Exercise to Be Aware of Your Dreams

By Harold Klemp, from Animals Are Soul Too!

To become more aware of the role they play in your daily life, keep a record of your dreams. They will gradually become easier to remember and easier to understand.

This spiritual exercise is called The Golden Cup.

Every evening at bedtime, visualize a golden cup to be filled with your dream experiences. The cup sits by your bed.

When you awake in the morning, in contemplation or in your imagination, drink from the cup. You are drinking in the experiences, a conscious way of saying, I want to remember what I’m doing on the inner planes while my body is asleep.

The golden cup is Soul; it is you. As you put more attention on drinking from the cup, it takes on a life of its own. the more the ECK flows in and out of the cup, the more Soul shines of Its own golden light. You, as Soul, become an ever brighter vehicle for the Holy Spirit.

The experiences you have will lead to greater awareness of your life and its divine meaning.