A Corgi Returns To Love Again 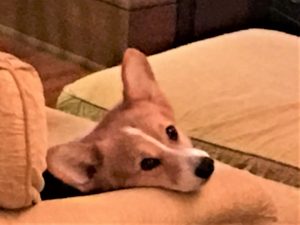 The ECK, Divine Spirit, guided us to a wonderful place where we could meet a litter of four-week-old corgi puppies. The woman who bred them brought the mother and the puppies to us, and Robert and I sat on the grass with the dogs between us.

Grown corgis have big ears that stick straight up, but a corgi puppy’s ears lie flat, giving little four-week-old corgis the appearance of guinea pigs. This litter included five red-and-white puppies and two tricolors. Except for one, none of them moved while we watched them; they just lay in the sun and slept.

I noticed the smallest tricolor puppy of the litter was super active, with one ear up and the other down. While his littermates slept, he waddled across the grass to Robert and looked up at him. Then this tiny puppy determinedly turned around, passed by his sleeping siblings, and came to visit, fixing on me with a sweet gaze.

“But we’re looking for a red-and-white puppy,” I sympathetically told the little fellow.

Obviously not getting his message through, the puppy turned around, again crossed to the other side, rolled over on to his back, and looked up at Robert. Then he headed back toward me and wiggled his tiny body underneath my hand. I acknowledged him with a petting, thinking he was cute. But he wouldn’t let up. Repeatedly he traveled back and forth between the two of us.

After forty-five minutes of his maneuver, the woman asked us if we’d made a decision about which pup to choose. Robert and I looked at each other. “I think it’s the little tricolor with one ear up and one ear down,” I conceded.

In a couple of weeks I returned to pick up the persistent puppy. The other pups were awake that day, wandering around in a big box on the table. The only one standing on his hind legs, looking over the top of the box, now with both ears up and staring at me, was the little guy I’d be bringing home. He couldn’t seem to take his eyes off me. The whole time I was there, this pup was the only one standing up and staring at me.

The woman said, “He’s never been separated from the litter. He’ll be very noisy going home.”

Fully expecting an uproar, I put the puppy in a little carrier next to me in the car. During the drive I stuck my fingers through the carrier door to assure him. But he was perfectly happy and quiet.

At home, I thought he would cry through the first night away from his litter, but after I took him outside once to relieve himself, he never made a sound. He slept the entire night peacefully, in the carrier, by my bed.

We named our new family member Porter. It was the name that came to me while I drove the puppy home.

In the following days, whenever Porter was downstairs, he seemed interested in climbing up the stairs. It was as if he knew his way around the house, because he always wanted to go up to the next step. It was as if everything seemed familiar to him.

One day Robert and I were watching television upstairs. I lay on the couch, and Porter was playing on the floor. Robert said, “I’m going to go downstairs for a minute.”

I was reminded that whenever I’d lie on the couch when we had Duncan, his favorite position was to scoot to the end of the couch, put his head on the armrest, and spread his back legs out flat. I called it the “corgi rug.” 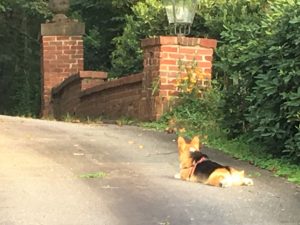 Before Robert went downstairs, he placed the little puppy on the couch with me. Porter immediately hurried to its end, tried to put his little head up on the high armrest, and spread his back feet into corgi-rug pose. While we watched Porter imitate Duncan’s classic move, tears came to Robert’s eyes. We never thought we’d see Duncan’s couch-armrest position again. And yet here it was.

We live on a mountainside, and our lawn stretches down a hill to a forested area. When Robert and I took Porter outside, he always stayed nearby, within a few feet.

The day after Porter assumed the corgi-rug pose, we took him for his regular potty break and expected him, as usual, to stay near us. But suddenly he ran off. He headed down the hill, and we followed after him. Although Porter had never been down that hill, it looked as if he was heading toward the woods. At the wood’s edge, we had placed a flat, square marker for Duncan’s grave.

Instead of running into the woods, Porter ran directly to that marker, climbed onto the tiles that covered it, and sat with his ears straight up, staring up at us. The marker was engraved with Duncan’s name and the dates of his birth and death. Now it served as a backdrop to the puppy. As we took in the sight of Porter sitting on Duncan’s grave and framed by his tombstone, we started to say to each other, “Maybe Duncan really is back with us.” 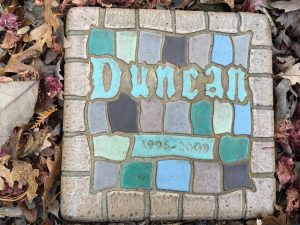 One of my fondest memories of Duncan was how lovingly he raised our yellow Labrador retriever, Miles, from puppyhood. I always referred to Miles as the walking heart. All I needed to do was walk into a room and say, “Miles, I need a hug.” I’d drop down on my knees, and he’d come over, stand on his hind legs, and place his paws on my shoulder, and I would embrace him. Every morning, he’d be by my bed. I’d automatically drop down on my knees to start my day with one of his hugs.

Because corgis are herding dogs, Duncan devised a favorite game he and Miles played with each other. Duncan would bark twice to get Miles’s attention. Miles would start to trot. Duncan would run after and herd Miles as the two dogs ran around the property. After Duncan passed away, Miles was depressed and missed his best buddy. 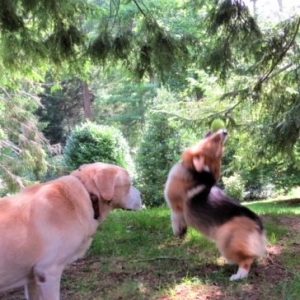 On the seventh day after Porter’s arrival, we let the two dogs go outside. Just as Duncan used to do, Porter looked up at Miles and let out a couple of high-pitched puppy barks. Miles moved forward. Little six-week-old Porter charged after him. The dogs were playing Duncan’s and Miles’s favorite herding game.

From that point on, it was as if Miles returned to life. He was a different dog. He had aged when Duncan died, and now he was young again. Miles and Porter formed the same relationship as Miles had had with Duncan. They played the herding game for years.

From Duncan and Porter, I had my own experience with Soul as an eternal being. Soul is eternal. Love is eternal. Soul wants to come back into Its loving relationships with other Souls and reunite with them in the physical as well as in the higher worlds.