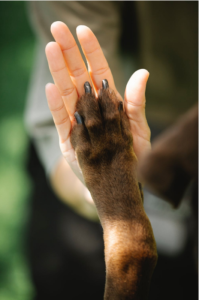 She felt terrible, but she went to work. Her boss was a very understanding person. “On a day like this, sometimes it’s better just to forget work,” he advised. “Go to some special place or talk with a special person.” And the woman had someone in mind, a very close friend.

When she arrived at her friend’s home, he was painting the garage. His dog Buck sat next to him. Buck had always been very unfriendly toward women and very protective of his owner. When he saw the woman approaching, Buck began to growl. The dog sat there growling at her as she watched her friend paint his garage.

The woman needed love, but she didn’t know how to ask for it. She was too shy to say, I feel really down; I just need a hug. As her friend kept painting the garage, she felt worse and worse. Pretty soon he finished. But rather than come over and talk to her, he began cleaning his brushes. She sat on the steps watching him, feeling worse than ever. Buck had gone off somewhere, and she was glad. She didn’t need him snarling at her.

Suddenly Buck crept up behind her. She stiffened and waited for him to start his usual growling. Instead, he licked her on the cheek, then sat down beside her and let her pet him.

The woman realized that the dog understood her need and had come to give her love because no one else would give it, mainly because she didn’t know how to ask.

The dog was also Soul, responding to the divine love that comes down from the highest plane of God. The woman wasn’t someone that others would expect needed any love; she was one of the “strong” people whom others asked for love. But the dog saw her need and understood.

Excerpted from Stories to Help You See God in Your Life, ECK Parables, Book 4