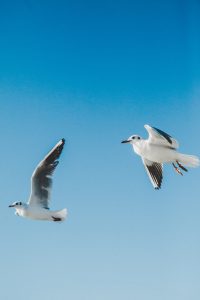 I have always been skeptical of miracles. As a doctor in Munich, Germany, my miracles are to discover exactly how the eyes work and can be healed, for instance, or how they interact with the brain.

But once during a long journey to the other side of the world, a different sort of miracle occurred.

I spent eighteen days in a little village on the northern coast of New Zealand. One day I noticed that a seagull had one foot caught in several angler’s lines and hooks. The foot was so bound up, it could not reach the ground. I guessed there must be a hook lodged under the wing at the side of the breast, which held the lines that bound the leg. The bird was able to fly, but it could not walk.

Each day, I fed the bird, crawled very close to him, and spoke to him of his problem and an easy way out of it if he would let me help. Sometimes I had the scissors with me. But the bird did not allow my hand to come within a yard of his leg.

For some reason, the bird’s dilemma was totally compelling to me. I went out and bought a piece of fisherman’s netting, and enlisted the help of a hotel neighbor, Win. I had high hopes for getting the bird free. Win was a former military test pilot and had once sailed from San Francisco to Auckland. He told me he’d once freed an albatross from a hook. But even with Win’s help, I could not catch the bird.

Soon helpful Win and family had to return to Auckland. I sat down to give the bird’s plight some careful consideration. Perhaps I could give him some medicine in his food that would make him drowsy. My scheme did not work. The bird could still easily outmaneuver me. A sadness washed over my heart. I could not help the crippled seagull except to feed him.

As I studied the seagull, I decided he must be plagued by at least three hooks. One large hook was fixed in his breast. It anchored a smaller line whose hook had pierced the right leg and bound it. A third line was ensnared with the second. Its hook hung halfway down the tangled leg.

Each morning at dawn, the bird waited in front of my window. I blessed him in the name of God, Divine Spirit, and my spiritual guide, the Mahanta.

I became so upset, I sent a letter to my friend Sigrun in Munich, telling her about the bird. Sigrun sent me a letter back: “Perhaps another bird will help.” Maybe she imagined a very kind bird would bite away the lines.

As I fed the bird some cheese, I pondered Sigrun’s words. All at once a small, greedy seagull swooped in to steal the food. But one of its wings caught on the small, dangling hook.

The larger bird flapped skyward, with the small seagull hanging from his leg, trying to fly with its free wing. What a mess! Both birds plunged into the water with a large splash.

I shouted for help as I watched the birds spread their wings to hold their beaks above water. They looked like two wet rags. I ran for the net and the scissors from my cabin. After much chasing and shouting, I eventually drove them into a bush and got the net over them.

First I freed the small seagull from the hook. He immediately took wing. Then I turned to the crippled bird’s leg. What a joy, after two weeks of longing, to finally hold that cold little foot!

The bird eyed me quietly, perhaps knowing I meant no harm. Gently I located a big hook at the side of its breast. It was difficult to remove. The hook was stuck firmly between the feather quills, with a kind of glue formed by fat and dirt. But I finally got it free. I quickly removed the other lines from his legs, and the bird flapped its powerful wings and headed toward freedom.

Over the next day or so, I continued to watch his progress on the beach. At first, he could not reach the ground with his once-bound leg. I wondered if the bird would ever overcome the atrophy of the muscles and tendons.

About that time, I had to leave, but I was scheduled to return about five weeks later. When I came back from my trip, the hotel owner said, “Oh, it’s you. You know, that seagull you helped has waited each day for you in front of your old window!”

I took my old room, and watched for the bird. Soon I saw him running along the strand, only limping a tiny bit. It was a wonderful miracle.