Well, Alita had just taken up knitting. She became so engrossed in knitting one day, she knitted clean through the time set aside for the HU session. OK, Minnou forgave her that day, but this HU session is for Minnou too. 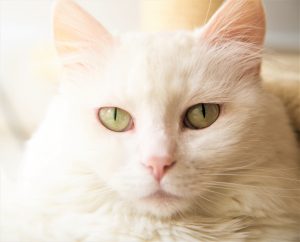 You have to understand that animals have a state of consciousness sometimes that is much greater than that of the humans you find around yourself. They have an understanding of human nature—something that is far and away above that of many people. Except animals don’t know how to speak; their vocal cords don’t lend themselves to it. And they don’t write because their paws don’t lend themselves to bending around pencils very well.

Minnou Has Something Important to Say

So, the next day, Alita was knitting away, totally lost, trying to keep track of the stitches. All of a sudden, Minnou made a meowing sound such as Alita had never heard before. She looked at her cat and asked, “Minnou, what are you saying?” But Alita couldn’t break through.

Whenever she and Minnou run into this stalemate, they have a little “show me” exercise they do.

So Alita said, “Show me.” And Minnou walked into the bedroom, stopped by the chair, which is Alita’s special spiritual-exercise chair, and then looked up into Alita’s face very expectantly, waiting for something. Alita thought, Well, it must be an hour yet before the HU session with the Mahanta. I just can’t figure out what Minnou is doing. She must have gotten her time schedule off.

But then Alita looked at a clock, and she said, “Oh, it’s nearly at the end of our session!” Then she realized that Minnou had waited through the whole session. She had let yesterday’s slip by, but today she was saying, “No, Mom.” Alita realized that Minnou’s meows were simply saying, “Hey, it’s time. This is the time we meet the Mahanta.”

The interesting thing is that around this time Alita had been focusing on a contemplation quote which was dealing with the expression “God is love.” And she realized then that Minnou had proved the point.

Well, that too showed a change in consciousness, where change is change, because Alita had to be more aware. She had to reach a higher state of consciousness if she was going to keep knitting and continue the HU sessions. At the same time, Minnou was showing that she understood things about the spiritual life in a way that Alita had undoubtedly never realized before.