While she was singing HU, along came a moth. It was a beautiful, golden moth, and it landed on her blouse, right above her heart. Rose put out her hand, and the moth made its way down her arm to her hand and sat there. 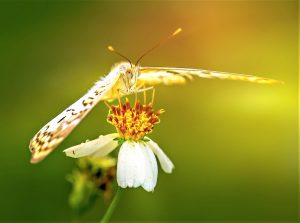 The two- and three-year-old children saw immediately what was happening. They said, “It’s a gift from God to you.”

It was a golden moth—a beautiful moth. Several of the kids ran off to get another teacher. When that teacher came, she said, “Aw, it’s just an ugly moth.” A second teacher said, “It’s just a moth.” But the kids knew better.

So when it was time to go in, Rose and the kids talked about the moth as being a gift from God. Just before they went back into the school, they said to the moth, “We’re going to have to say good-bye now.” And the moth took off. It flew away, but it came back and landed on Rose once again. And the kids said, “You’ll always be with us, but you’ve got to go now.” Because the kids had to go too.

Then the moth took off for good. But it definitely could feel the love that was coming from the sound of HU and from Rose.

When Rose and the kids went inside, these little two- and three-year-olds talked about God’s love and the moth—how it had been time to let the moth go, but it would always be with them. The kids said, “We know that, Miss Rosie, God is always with us.”

The other teachers couldn’t shift gears, but the kids did just as naturally as a river follows its bed. They knew. And the adults, who supposedly knew much better than the kids, didn’t know at all.

From “Shifting Gears” in The Master’s Talks in The Year of Thanksgiving—2008–9.