Releasing the Past with My Sled Dog 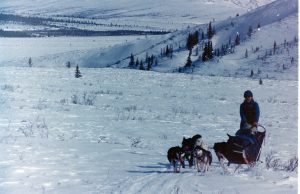 When we were younger and living in Alaska, my husband and I had sled dogs. He did some racing, but I never really enjoyed running a team. With beautiful scenery and my dog buddies, mushing should have brought joy, not a heavy lump of dread in my gut. But I loved raising puppies, training lead dogs, and finding and clearing old trails, so I concentrated on those tasks related to sledding. 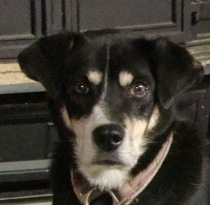 My lead dog, Dizzy, was born in one of the last litters we raised. We had a special bond from the time of her birth. While she was still in her prime, she suddenly refused to run. Normal sled dogs go wild with joy at the sight of harnesses or a sled, but now Dizzy would sit on her house like a statue, head turned away from me. We could find no physical reason; she simply declared herself retired. I ran my team less and less until I, too, retired.

One day, in contemplation, I saw myself walking up a high hill. When I reached the top, I remembered that old feeling of dread, so I asked why.

The scene instantly shifted from a hilltop vista to an open birch forest in late-winter sunshine, between one and two hundred years ago. In that life I was a Native or Metis man (a person of Indigenous and European descent living in Canada or the northern United States). I drove my dog team toward a trading post to sell my winter’s catch of fur. An inner voice in the contemplation told me that I would be killed for my dogs and furs. The voice also named a farm in Ontario where my body would be buried.

Now that feeling of dread about running a sled-dog team made sense! Every time I had driven a dog team in this lifetime, I was subconsciously reliving my approach to death in that other lifetime.

I decided to let go of the baggage from back then by loading the dread into my sled and hitching my old dogs for one last run. We would take a short loop trail and dump out that past-life memory at the turnaround point. 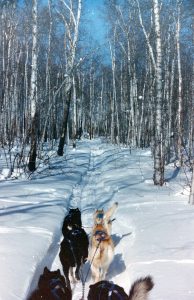 I gathered harnesses and carried them to the dogs. To my surprise, Dizzy was leaping and screaming with joy right along with the others. I instinctively knew that she had died trying to defend me back then. Clearly she, too, needed to let go of the past.

Like that long-ago day, this was also a bright, late-winter day. During our symbolic run, Dizzy and I left behind the residue of that lifetime and returned with light hearts into the freedom of Now.

You are invited to reflect on the spiritual messages in this story by contemplating on this passage from Past Lives, Dreams, and Soul Travel, by Harold Klemp: 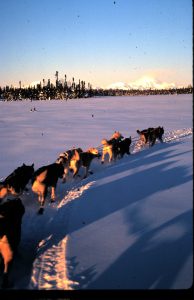 To awaken past-life dreams, make a list of people and things you like or dislike. Also note if you feel a special attraction to some country, locale, or time period in history. There is a reason for such interest.

Now pay attention to your dreams.