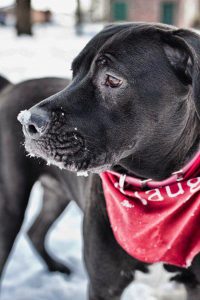 With joyful anticipation, we picked up our new puppy! She was a few months old, gangly, and adorable in the body she had yet to grow into. Our family fussed over her and made her feel welcomed; however, her excitement did not match our own. We discovered she was fearful and anxious about almost everything. At first, we thought this was due to her new living situation and being taken from her mother and siblings, but as time went by, we realized it was more than that. While she had learned to accept us as her family, she was skittish in the presence of anyone else, including other dogs.

One night, our precious pup awkwardly climbed into bed with me. Observing her curled at my feet, I reached down to stroke her. At this point, my boys and I still had not agreed on a name for her. We came up with a few, but none of them seemed fitting. With this strongly on my mind, I quietly said to our newest family member, “What would you like your name to be?”

As I fell asleep and entered my dream worlds, I found myself in a space where I felt an abundance of love. A word began to form, one golden letter at a time: N-I-Y-A-H. I woke up and immediately thought, What is that word? I had never heard it before, so I looked it up. The definitions I found online were “the goddess of peace,” from one source, and “one who is peaceful,” from another.

Surprised, I glanced down at our pup sleeping soundly. “Niyah? Your name is Niyah?” She lifted her head, and her eyes opened. She gazed at me intently, as if she wasn’t sure why I was so uncertain.

“OK,” I agreed. “It’s a beautiful name to grow into.” And she would, with time and a whole lot of love.

In my crusade to help Niyah, I had to use every creative tool available. We began by taking walks, which turned into bike rides to a nearby park where owners took their dogs to socialize. She hid behind my legs, trembling every time a dog approached her. No amount of assurance from me could comfort her.

Our bike rides became longer. I rode, with her following alongside, for a few miles, and then, when she was drained of all her anxious energy, we returned to the park. I had her sit, facing me, while I lavished her with love and attention. Once I had her in a calm state, the dogs were allowed to approach and sniff her from behind. I made sure they did not come into her visual area but kept them at a short distance from her face.

I noticed she tensed up at the start of this new routine, but I kept petting her and speaking softly until she relaxed. As soon as I felt her body loosen up, we would walk away from the dogs and people to give her some relief before biking home. I did my best to respect her by only exposing her in small increments to her fears.

Each day we practiced this routine. Finally, many months later, Niyah had a breakthrough. We had gone for our usual bike ride, and a dog came over to introduce himself. I got into my position, cooing at her while he smelled her. Suddenly she turned curiously and began to sniff him back. Eureka!

It would still take many more bike rides and walks before Niyah became totally comfortable in the presence of dogs and strangers, but she eventually triumphed over her fears. In the meantime, through her learning experience, I received many lessons of my own. I had to learn how to put my own will aside and allow her to go at her own pace. I could not force her to not be afraid, no matter how unfounded I thought her fears were. Or how impatient I felt about her progress.

Only time, love, and compassion could help her. By singing HU (a love song to God), I was able to keep myself in the right frame of mind and hold a loving space for her.

I helped Niyah receive the gift of freedom from fear and anxiety. However, the gifts I received in return far outnumbered what I had given her. I am grateful to this day for all she taught me and still wonder, Who was teaching whom?