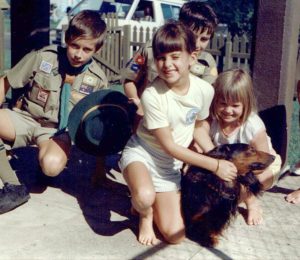 Nelson, or “Nello,” as we affectionately referred to him, was once a show dog who had his career cut short because he developed an almost indistinguishable bump on his nose. This career change opened up a new life mission—to be a friend and teacher for our family.

I have always loved dachshunds. Their body is one of the most peculiar and impractical for a dog living in a family’s home. Yet they seem to get around fine, unaware of the awkwardness and limitations humans see in them.

Nelson could run quite fast and jump up on a person’s lap, but I always found most humorous the way he would run up and down our long front stairs. He’d bounce his little legs and long body in a sideways, crablike motion or skip entire stairs in a frontal launch to get to the bottom quickly.

I’ve wondered about the moment a Soul chooses to reincarnate as a dachshund. Does It look at the body on offer for the next life and think, That one will be interesting? Or is it more a kind of necessary acceptance? OK, if I have to, in order to teach this human something about himself.

As a child, I was not all that different from a dachshund. Though not tall (nor long), I was skinny and, unlike Nelson, felt awkward in my body. I was totally uncoordinated in sports and had trouble keeping up with most of what my peers could do physically. I dealt with all sorts of challenges from other boys at school. Consequently, I viewed my body in terms of its limitations.

One event with Nelson, though, taught me a powerful lesson.

My brother and I had a paper route that spanned several blocks around our suburban neighborhood. One house had three large and scary dogs—two German shepherds and a crossbred mix with the fearlessness of a pig dog (a dog bred to hunt wild pigs), the strength of a rottweiler, and the unusually large size of some other breed. My brother and I would take turns on the paper route so we each only faced that house and those dogs once every other week.

The newspaper company insisted on the paper being delivered directly into the homeowner’s mailbox and not thrown over the fence into the yard. At the dreaded house, the mailbox was fixed to the dog fence. I would tentatively reach my little arm forward to push the newspaper into the mail slot while the dogs hung over the fence, barking and drooling.

Of course, they were probably not at all vicious. It was my own fear that had built up an image of them thinking, I am going to eat this kid.

One day in the week leading up to Christmas, it was my turn to deliver the paper to this house. As I approached the fence, I discovered that the gate had been left open. Before I knew it, I was running home as fast as I could, with the three dogs right on my tail.

I thought I was a goner, when out from my yard came Nelson—all of eight inches tall. He was ready to tell those dogs that if they were going to mess with me, they had to deal with him. The dogs bore down on me. But before I knew it, they sheepishly turned around and whimpered home, with Nelson chasing after them.

Nelson then proudly and nonchalantly strutted back home by my side, as if nothing had happened.

It wasn’t only that Nelson had protected me like a brother; there was something else about that whole event that has stayed with me. It was as if Nelson was oblivious to his limitations. He acted as if he was bigger and stronger than the three other dogs, despite being a third the size of the smallest of them. He had no fear—only courage.

Being chased was not new to me. And it wasn’t that Nelson inspired me to bark when I dealt with my own challenging situations. That day with the big dogs, Nelson showed me what it means to be comfortable in my own skin. He showed me that the perceived limitations of the physical body are only opportunities for Soul to express Its true inner strength.

It’s incredible how, thirty years later, a childhood pet continues to teach me and be a reminder of what I’m capable of. An animal’s love has no limitations. Perhaps the same is true for us humans.