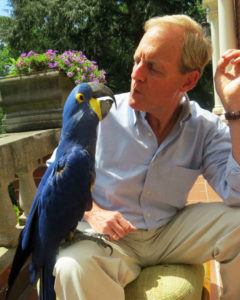 I used to travel to the Brazilian rain forest a couple of times each year to learn more about hyacinth macaws—a rare, beautiful bird which is on the verge of extinction. With a lifespan of approximately seventy-five years, hyacinth macaws are largest of the macaws, with a longer tail and bigger beak than any other parrot. In an avocado grove thirty miles south of Miami, Florida, I established a breeding farm for endangered species of parrots. There, we were successful in breeding and propagating hyacinth macaws and other rare parrots.

I continued my preservation work in Florida for eighteen years. Before I left the state to move to North Carolina, my birds went to live at a Floridian jungle site established in the 1930s. Visitors may wander along its paths and appreciate the wildlife, including monkeys that range free in the jungle canopy. I made arrangements to build geodesic domes that would mimic a tropical environment for my variety of parrots. Within these open-air, wire-mesh domes, the hyacinth macaws and other parrots could fly free.

Part of the Flock

A year later, I returned to Florida and walked along the path at the jungle site. Although I could no longer claim them as mine, I’d hoped to visit the birds or at least catch a glimpse of them. While surrounded by other visitors, I suddenly heard a horrendous uproar of birds screaming and yelling. The site’s caretaker tried to figure out what was happening. The birds had never made this kind of commotion.

We quickly realized that the macaws, including the hyacinths, had spotted me from their home in the big geodesic dome. It was as if they were calling, “Scott’s here!” Their greetings traveled from dome to dome as they successfully communicated their excitement at seeing me again. As I approached each dome, they flew from the side nearest me in raucous acknowledgment.

I recalled that whenever I’d entered the Florida grove where they used to live, the birds always gave me a similar reception with all their love. After I’d leave the grove, they’d retreat to their aviaries and be quiet.

I stood still now, feeling chills of happiness at their greetings. Even though I had cared for the birds for all those years, they hadn’t been my pets. But to them, I must have become part of their flock. They had not forgotten me. Their remembrance of me filled my heart with the joy of receiving God’s love in this way.

Now I share my new home in North Carolina with Blue, one of the birds I hatched and raised from a pair of wild hyacinth macaws. Blue has cobalt-blue coloring and rings of bright yellow around her eyes and beak. I took her with me from Florida when I moved, not knowing that someday she would help me experience even more of God’s love. 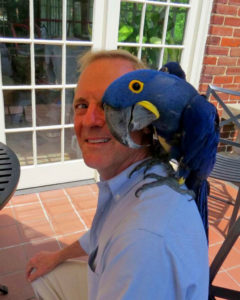 I’ve come to realize, since studying the teachings of Eckankar, that giving and receiving love is really the most important thing. It’s why we’re here. That’s our purpose. But I’d been wanting a deeper connection and understanding of what love is in order to spiritually unfold more.

I decided to take a short nap one afternoon. As I climbed into bed, I began to lightly sing HU, an ancient sound from the Creator that gently weaves through all life. I asked my spiritual guide, the Inner Master, “Show me love.” Then I went to sleep.

About forty minutes later, I awakened to find Blue standing on my leg on top of the covers. This was quite remarkable. Blue’s cage was in the sunroom in my large house, and she’d never been to the second floor. But on this day, she had figured out how to open her birdcage door and break out.

To arrive in my bedroom, one of four on that floor, Blue had to go through a foreign environment. She’d walked through the sunroom and living room, then climbed up the stairs to a landing and another set of stairs. She had walked through all the rooms until arriving at mine. Then she’d carefully climbed up my sheet from the floor and perched on my leg.

I began to awaken, focus on the bird, and whisper, “Blue?”

Blue walked across my body and up to my chest. She placed her head under my neck and dropped down, spreading her expansive wings across my heart. I felt a wave of divine love coming through this Soul. Blue’s love took me higher and higher into a profound spiritual experience.

People talk about giving love, but it’s not always easy to accept love. Blue opened my heart to accept more love that day. I think this is what I was looking for when I asked, “Show me love.” I wanted the flow of love to be greater so I could give and share it.

Blue served as a carrier of divine love. This experience assured me that divine love is with us always. But sometimes we need to ask for the blessing of being shown.