Do Animals Go To Heaven? 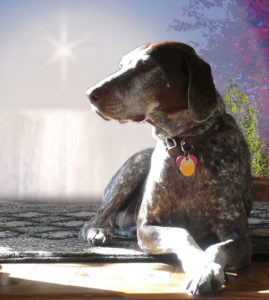 Cats, dogs, and turtles have a heaven, just like people. It makes you wonder why some people get so angry to hear that animals go to heaven. That’s where we all come from.

A man had a very old dog, Zeke, who was his special friend. The veterinarian had bad news, though. The fourteen-and-a-half-year-old dog had cancer in his abdomen, but no pain.

He’d probably slip peacefully away, said the vet. But if Zeke developed a breathing problem, it would be time to let him go.

That sad day soon came. The man and his wife took Zeke to the vet and had him put to sleep. Zeke was in the man’s arms when he went, literally leaping from that tired old body like a prisoner set free from his cell.

On the drive home, the man’s Spiritual Eye opened. He saw Prajapati, the ECK Master who cares for the animals.

Prajapati was standing on a hill near a tree. Behind him came a stream of bright golden sunlight from the sky. But there was also a ball of light, and the man knew instinctively that it was his departed friend, Zeke, in the Soul body.

By telepathic voice, Zeke said to the man, “Daddy, I’m free! Thank you for all the love.”

Many people love their pets very much and feel a deep sense of loss when they pass over. And they often worry, Is that the end? Does my dear friend simply cease to be?

Soul is eternal. Soul lives on in the next world, just as It did in this one.

And, if it is right for that Soul, It can come back to earth in another body, sometimes to the same family It was with before.

Is God’s love even sufficient for animals? Yes, it very clearly is—at least, it is clear to those who have the eyes to see and the spiritual awareness to recognize this eternal truth.