“Eppie” and her adult son hadn’t seen eye-to-eye since his youth. But after years of ECK study, Eppie realized that it was her anger and her temper that had caused this rift between her son and herself. There was more, but her anger played a big role. They had this karmic relationship, and Eppie explained it very nicely when she said, “We write our own script, and then we direct and star in our own play.” In other words, we make our own trouble.

She was referring back to ten years before, when she had worked a night job. She would get off in the morning at six o’clock, jump in the car, go home, pick up her son (because there was only one car between them), and take him to work.

Well, on this particular day on their drive to work, they got into words. Tempers became heated, so that by the time they got there, he jumped out of the car, slammed the door, and walked off without even looking back.

Eppie said it felt as if she had been stabbed in the heart. She was deeply hurt. As she drove along, she was looking for a place where she could pull over, because she couldn’t breathe. Her chest was so tight, and her arm was hurting her. These weren’t good signs, and she was very concerned.

Off in a strip mall down the road, there was a pink neon light of some kind. She decided that would be a good place to stop, and she pulled in.

Now, as she had been driving by herself, she got this nudge that she ought to have a puppy or a kitten so she could have companionship and heal her broken heart.

When she pulled into the driveway of this strip mall, she saw that the pink neon sign was for a pet shop. It was a nice coincidence. She looked and said, “Whoa, a pet shop. OK!”

She expected it to be closed, because it was before seven. Nobody opens at seven. But she went up to the door, and the little sign said Open. She opened the door and walked in, and the little bells on the door tinkled to let the owner know somebody was coming in.

Eppie called out, just to let anybody there know that it was nothing to worry about; it was just a customer come early. Then a very nice woman came out of the back. She said this was the first day of business. She opened early because she hadn’t been able to sleep the night before. She would be in the back room, and if Eppie needed any help, she could just call. Eppie said, “Fine.” 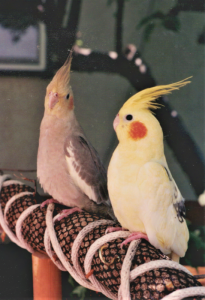 On top of the piece of driftwood were a cockatiel—a small parrot—and his mate. The male looked at Eppie, studied her very carefully, and then started walking along this piece of driftwood. He kept his eye on her. He was taking her measure: Yes indeed, uh-huh. Got some kind of psychological problem here, I believe.

He came close, and then he stopped and picked up a twig. It was about the length of a little finger. And he did a cute little somersault. Birds are cute like that. Then, while upside-down, he took the twig out of his beak and held it up to her. Eppie saw it as a gift of peace, a gift of love.

Eppie very carefully took this little twig of peace because she needed peace. When she took the twig, the male cockatiel jumped on her hand and began walking up her arm, and his mate also walked up. There were other birds on the table, and some of those came over—birds of a feather and those not of a feather. They all got in line and started walking up Eppie’s arm. The male cockatiel came up right underneath her throat. He was making room for all the others, so they could hop up and get aboard.

Some of the birds migrated over to Eppie’s other side. So she was standing there, looking like a bird stand, she said. All of a sudden she heard a gasp behind her—just after she had noticed a sign on the table that said “Please do not take birds off the table.”

She had been standing there, trying to shake the birds off gently onto the table before she heard this gasp, but they wouldn’t go. They just hung on. Birds of a feather and not of a feather, all together. They all hung on. Then the shop owner said, “My God! How did you do that?”

And Eppie said something to the effect of, “Tweren’t me, Sheriff. They did it.” The owner said, “Well, how are you going to get them off?” Some had never been handled, she said. But they handled Eppie very nicely.

In answer, Eppie leaned down. She put her left hand on the table. The leader stepped off, and all the little birds of a feather on the left side—and those not of the same feather—got off onto the table. All the birds on the right side also got off when she put her right hand down on the table.

Eppie knew that this was the Mahanta’s way to heal her broken heart. Her heart was wide open now, and she felt such gratitude. So Eppie thanked the shop owner very much for letting her look at all the little animals there.

Then Eppie went home. As soon as she walked in, the phone began ringing. She picked it up. It was her son, apologizing. Eppie said, “You have already been forgiven.” Because she knew that when her heart was broken there was no room for love. And now there was no room in her heart for sadness, for hurt. There was just love—a heart full of love.