Free as a Wedge-Tailed Eagle 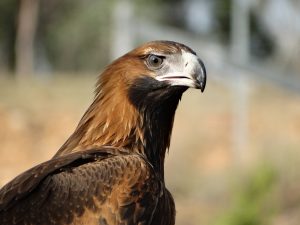 For thirty years, I worked as a small-animal veterinarian, mostly for cats and dogs. I also treated reptiles, guinea pigs, and mice and realized I really like exotic, unusual, and wild animals. Since my practice was located in the city, I didn’t get much wildlife to care for at my vet office, but when I did, I enjoyed working with the creatures.

After getting married I moved to a country town of about fourteen thousand people in central Queensland. It already had three vet clinics. Instead of starting another vet practice there, I decided to change careers and move into high-school teaching. Currently I work as a teacher’s aide. This gives me time to do voluntary work for a local wildlife-rescue group.

Australia has a lot of wildlife because it’s a vast, open continent. Unfortunately the animals are unsafe on local roads, and the vets here aren’t able to do much to help them. Volunteering with the rescue group means being an advocate for wildlife that is often forgotten. I love animals and like treating them simply because they need assistance.

In a conversation with one of the group’s rescuers, I learned they are limited in their efforts to help injured animals because the clinic can only treat them during office hours. This spurred the idea of establishing a wildlife hospital, and we’re in the process of fulfilling that dream.

One November day, a woman saw a wedge-tailed eagle while she was driving her car near a national park. She called a local wildlife carer, Megan, who drove to the site. Together, they managed to capture the bird. They noticed it could fly a little, but there was something obviously wrong with one of its legs. 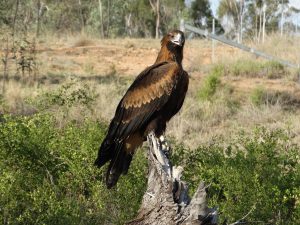 Wedge-tailed eagles are the largest bird of prey in Australia and one of the world’s biggest eagles. They’re iconic here, like the American bald eagle in the United States. Yet this particular raptor was so calm and tame that Megan was able to wrap a towel around him and pop him into a cage.

Megan rang June, who is the carer in my town. June, a lovely lady I’ve befriended over our mutual love for animals, loves all animals. If anything needs help, she gives it, regardless of species. And I feel the same.

Then Megan drove over an hour to bring the eagle to our town. Later I learned the lady who had first found the injured eagle had been going through a state of depression and lack of self-esteem. She was overjoyed at being of worth in helping the injured bird.

It was exciting to have my first opportunity to treat a wedge-tailed eagle, and I felt in total awe. I sensed he knew he was being looked after, because he did not react aggressively in any way, at any time.

Normally when someone puts a towel around a raptor, for safety it’s necessary to wear welding gloves so its claws or its beak don’t cut through your arms. I only had to wrap a towel around this bird’s wings, and I left his head free. It was as if, without being upset or afraid, he was saying, “OK, where are you taking me?” I think he felt the love in each volunteer on our tag team of rescuers. Eventually June named the eagle Echo because of all the people who came together at the right time to help him survive.

Initially I followed normal procedure and held the injured bird’s head to the side, but he thrashed around, and I got the nudge to release him. Surprisingly he sat calmly. While I examined his leg, June kept his wings from flapping. I diagnosed a fractured femur.

I took him to the vet practice where I normally work and did an X-ray. His fracture was barely visible. Neither I nor any of the other vets wanted to risk orthopedic surgery, because it might cause more damage. I decided to take the eagle to another vet who had more experience with fracture repairs. His office was a three-hour drive away.

I put the eagle in a cage in the back of my car. For the first five minutes of our drive, he was moving and rattling around in the cage. I was very apprehensive that if he continued this behavior, he would make the fracture worse on our long, 300-kilometer (186-mile) drive to the other vet’s surgery.

I have the HU app downloaded on my phone. It features a twenty-minute recording of thousands of people singing HU, a love song to God. At the start of any drive, I play the HU recording, and then I repeat it for as long as I like.

I felt very tense with the eagle thrashing about. I thought that playing HU would help calm us. Quietly, I also asked for awareness of the presence of Prajapati, an ECK Master who specializes in animals, and Wah Z, the Inner Master who is my spiritual guide.

Echo started moving around. “Please don’t do that,” I called to him. “You need to sit down quietly.” Within a minute, he quieted. For two and three-quarter hours Echo sat calmly. He moved around once to look in a different direction. Then he sat down again. Even when the HU song wasn’t playing, he only looked around without moving, staying absolutely peaceful.

I’ve never known a wild bird to do anything like this. Echo was a juvenile but not a baby that hadn’t learned how to be aggressive. He was already on his own in the world. But he seemed content to have my assistance.

The vet X-rayed the bird again. Echo’s fracture seemed to be knitting already, and the bird had started tentatively using his leg. The vet decided to let Echo’s leg continue healing without refracturing it to repair it. Part of the bone was still intact, and part had cracked. His injury was like when a green tree branch folds instead of breaking. We call it a green-stick fracture.

On the way home, Echo and I went through the same process as on our drive to the vet. The bird started moving around in the cage, trying to settle himself. But knowing he was healing, I felt more relaxed. I played the HU app on my phone again. He stayed calm through the whole journey home. I took him back to June because she had a large aviary where he could rest and recover. 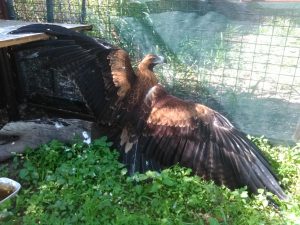 June kept Echo in a small cage for about three or four days to confine his movements and help with the fracture-healing process. Because he looked like he was healing amazingly quickly, she decided to transfer him to a larger aviary about the size of a big bedroom. Being a top-of-the-line predator, he would have to be kept in the cage alone.

When June moved Echo from the small to large cage, he was still acting tame and calm. So, although the two cages were about four or five yards apart, she didn’t wrap a towel around his body and carry him. She only said, “Come on,” and Echo walked by himself into the big cage.

June lives down the road from me, so I personally checked on Echo every three or four days. She updated me daily. His normal feeding patterns returned, his wild nature came back, and he began using his claw and leg as if he was well.

Young animals tend to heal quickly. After three weeks June said Echo looked ready to return to the wild. I asked if I could do the release because I’d love to see him fly freely. My husband, Clarrie, and I drove to the township nearest to where Echo had been found. There, we met Megan and Susie, the lady who had found Echo initially.

At the release spot, where Echo had been found, the four of us crawled under the barbed-wire fencing and walked into the forest. Then we set the cage on a log and opened the door. Echo hopped out onto the log and sat there for fifteen minutes, posing, as we took hundreds of photos. A breeze then came up. He opened his wings and flapped them a couple of times before easily flying to a nearby tree. 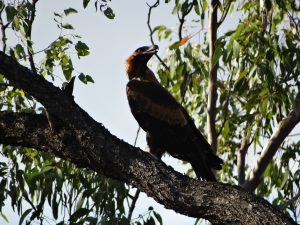 We followed along, watching him. He sat on the tree branch for another five or six minutes. A bigger breeze came up. He jumped into it. We thrilled at seeing him fly toward us and then away. It seemed as if he were swooping in to thank us before he left. It was an awesome, magical, wonderful experience.

As I reflected on the spiritual aspects of this experience with the injured eagle, it reminded me of the challenging job I’d had as a veterinarian within a city practice. Years ago, I came to the realization that although I might prefer caring for wildlife, a spiritual healing needed to be finished. I’d had dim memories of being a trapper in North America during a past life. In that lifetime I would have killed a number of animals. Now, as a veterinarian for decades, perhaps I was balancing karma by helping animals.

Before I moved to this small town and joined the wildlife-rescue group, I’d noticed a job listed online for working as a vet in a wildlife hospital. It described what would be my ideal job. I thought, “I would love to do this—helping wildlife by saving turtles in the ocean and things like that.” But at that time I was changing professions to be a teacher in my new town. Later, I knew I’d made the right choice. Teaching has been uplifting and is definitely the path for me.

But the listing for wildlife-hospital vet inspired an idea of starting a wildlife hospital in my new home. I now have the best of both worlds. For the first time in a long time, I really love my life. I’m hoping, in the future, to fuse teaching and wildlife rescue by bringing animals to schools. The love of animals could help at least a few troubled students. Having an animal to visit with could get through their shells to their hearts. 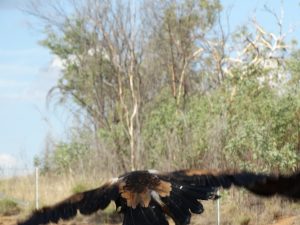 It was my honor to help the wedge-tailed eagle to freedom. And the experience paralleled my own journey toward being free for the kind of work I’ve always wanted to do with animals. In Eckankar, this type of spiritual guidance is called a waking dream. Echo was a waking-dream confirmation of my freedom to choose the path that is right for me.

I think of all the ECK Masters and their different roles in giving service. Quite often I’d get little whispers from the Mahanta, my spiritual guide: “Well, the wild animals need an advocate. Animals need someone to love them.” The experience of rescuing Echo showed me I don’t have to be a vet in a city practice. I would love to be a channel of the ECK, or Holy Spirit, for all animals and help open people’s hearts.