“Ashley” had driven a long way to meet her brother “Mike,” who lives in a desert town. When she got there, the two went out to lunch. 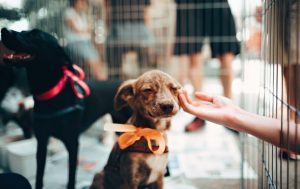 As they were waiting in line, they saw a man who had this little cage. Inside was the cutest little puppy. The man said, “He’s six weeks old.”

The man said, “Well, he doesn’t have a name. I’ve just been calling him Little Boy.”

The man thought a moment and said, “Why don’t you help me name him?”

Ashley liked that idea, because she had a name in mind. She said, “Buddy. B-U-D-D-Y.” The man didn’t respond at all. It was as if she hadn’t spoken.

Then her brother, Mike, said, “Bucky. B-U-C-K-Y.” At that, the man’s face lit up, and it was like the greatest name he’d ever heard in the whole world. It was the very best name. He said, “I will call him Bucky.”

Ashley was mystified. When the man left, she said to her brother, “You know, it’s odd how he just loved that name.”

Her brother replied, “It’s not the name he felt, but the love behind the name.” Mike’s own dog was named Bucky, and Mike dearly loved his dog.

That’s when Ashley realized that words alone don’t mean much. It’s the feeling behind them that creates the energy we respond to.

It’s always all about love.