A Spiritual Community for Shane, the Cat 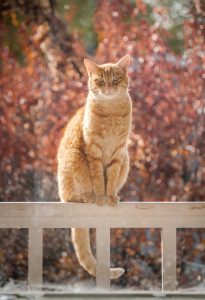 My contemplations lately have centered on the mysterious workings of divine love. How does love flow into life? Are what appear to be unconnected events really intertwined?

For six or seven years, in summer and winter, I occasionally saw a beautiful, big, peachy-orange tomcat in our neighborhood. I didn’t know if he was feral, as he looked sleek and healthy. However, I sensed that life on the streets had brought him into a few battles. He remained very cagey with me, keeping a long distance between us by crossing the street or running into a neighbor’s yard when he saw me.

My husband and I live in a small town that has plenty of green space and wildlife. I worried about this cat’s safety and well-being. When I saw the big tom in winter, I’d silently tell him to be careful of coyotes and raccoons. In summer I’d occasionally greet him and communicate that I hoped he’d be careful around cars. In response to my efforts to talk with him, he’d stare, flick his ears, and swish his tail while staying far away from me.

I thought about trying to catch him and take him to the local animal shelter. But because he looked so healthy, I felt hesitant to interfere, in case he belonged to someone. Our next-door neighbor had twice taken a lovely little “stray” gray cat to the animal shelter, only to find that the “homeless” cat already had a home that allowed her to be outside.

We have two very lively smooth fox terriers who, over the years, have chased any creature moving in our backyard, including stray cats on occasion. Because of my dogs, I felt it would be unsafe to place food out that would attract this beautiful Soul in a cat body to our yard. So each time I saw the cat, I’d simply wish him well and offer blessings in the name of the ECK, the Holy Spirit.

Where Did the Stray Cat Go?

This year I realized I hadn’t seen the big orange cat for eight or nine months and wondered if he was still alive. One day my husband and I were out for a casual bike ride around the neighborhood. I was excited to see the same cat a few houses away from ours and began to talk out loud to him. “It’s great to know you made it another year,” I said. A rush of love, gratitude, and joy flowed from my heart to him.

The next day, as I was taking our dogs for a walk, I noticed the cat basking in the sunshine beside our house. It was unusual for him to come so near us. But rather than running away, he continued to lie on the grass. He swished his tail, kept his eyes half-closed, and looked completely relaxed.

I’d been taking a class on animal communication and decided to see if he would be willing to communicate with me. I lightly asked him, “What is your name?”

Surprisingly I instantly received from him the name Shane.

He continued to look very regal and comfortable, lying in the grass. A wave of love and gratitude returned to my heart from his. It felt as if he appreciated being acknowledged and accepted.

Although Shane appeared to be in good shape, I still wondered if he was truly OK. How did he get enough to eat?

A few days after seeing him relaxing on our lawn, I walked with my dogs again. A neighbor who lives a few houses up the street struck up a conversation about our dogs. I followed up by asking, “Do you know of the orange cat?”

My neighbor explained that people on our street had adopted him. They fed Shane on their back decks and kept a shelter there for him. “He doesn’t let them touch him. He won’t go inside. But he has food, water, and shelter.”

I felt relieved and grateful to know that Shane was as cared for as he’d allow.

I remembered my question about how love weaves together apparently unconnected events and Souls. Gratefully I realized that the situation with Shane and his feral nature, the quiet kindness of our neighbors, and my concern for a stray cat’s welfare had created a spiritual community. Shane’s journey illustrated for me the mysterious ways Spirit moves through hidden channels and connects us all through divine love.

You are invited to reflect on the spiritual messages in this story by contemplating on this passage from What is Spiritual Freedom?, by Sri Harold Klemp:

There are spiritual communities of many different sizes—from small to immense—all around us. And within these communities, people are becoming more pure and uplifted individuals. 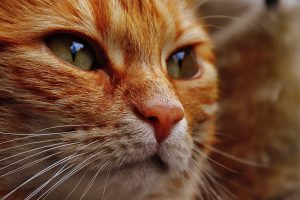 What are your spiritual communities? Are they composed of humans and animals?