I was born two and a half months prematurely and stayed in an incubator the whole time I was in the hospital. Upon first coming home, I was isolated from the rest of my family in the third-floor nursery. I rarely cried or moved.

My mother’s upbringing hadn’t prepared her for a baby of her own. She raised me as she had been raised, with nurses and nannies primarily responsible for infant care. I’m told that one day the nurse who always tended to me at home wasn’t on duty. My mother began telephoning friends and saying, “It’s crying. It’s crying!” Her interest in me sparked only after I grew.

Somehow, though, another Soul in our home picked up on an infant’s need for mothering.

Gigi, a small, silver-gray poodle, gave me my first taste of unconditional love. Within a couple days of my arrival at home, Gigi began checking on me in the nursery. Finally, she decided to climb into my crib with me. My family was fond of animals, and my mother was very animal oriented, so everyone was comfortable with Gigi taking up residence and watching over the new baby.

But my parents soon realized that Gigi wasn’t interested in leaving my crib after she’d settled there. Someone would have to pick her up and take her out to do her business or to eat. As soon as she finished her essential bodily functions, Gigi quickly ran up the stairs to the nursery and climbed back into the crib with me.

This routine went on for quite a while until Gigi had puppies of her own to mother. Her litter lived on the first floor of our house. Gigi would tend to her babies and then climb the stairs to spend time with me. Back and forth, she alternated several times a day between caring for her puppies and her human infant.

One day, my parents were away for the afternoon. While I slept, the nurse who took care of me must have left the nursery for a while. When my parents returned home, my mother’s first thought was to check on the puppies.

The puppies were nowhere to be found.

“Well, I’d better go upstairs and check on the baby,” my father said.

To his surprise, my father found Gigi in my crib with her entire litter. She had carried the pupppies, one-by-one, up three flights of stairs. Being a small poodle, Gigi must have been very determined. This was her solution to caring for her canine and human families. It was as if she were saying, “OK, now I’ve got this handled.”

Gigi continued to be my best childhood friend. She shared in the joy of sitting next to me as I drove my first peddle car. At an amusement park, when I rode a little boat that circled around a pole, I sat in the front seat with Gigi in the other seat behind me. 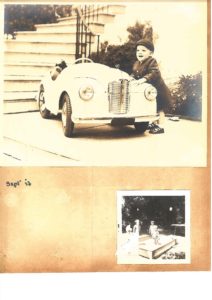 Gigi gave me my first experience of unconditional love during early childhood when I was most vulnerable. Because of her, animals have become a touchstone throughout my life. My relationships with animals are real and authentic, and I continue to make instantaneous connections with them.

Years later, I began studying the teachings of Eckankar, with the Mahanta as my inner spiritual guide. The Mahanta says to chelas (spiritual students), “I am always with you.” I realized that my childhood relationship with Gigi had helped me understand the truth of this promise. Her love showed me that the inner, loving presence of the Mahanta had always been with me.