A Little Bird Answers My Question 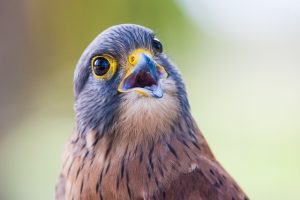 I was driving to work and spied a little bird on the dividing line between lanes. Concerned for its safety, I quickly doubled back to the spot.

When I turned around, I saw a man shooing the bird to the side of the road where there were no cars around. As I got out of my car, I asked the man, “Where did you come from?” He replied that he’d pulled over for the bird.

The bird was now on someone’s front lawn and out of danger from passing cars. I asked the man if he thought it was injured. I told him I’d take it to The Raptor Trust—a sanctuary for injured and orphaned birds, about forty minutes away. The man said he thought the bird was a fledgling. “It’s too late in the season for fledglings,” I said. But I wasn’t really sure.

We continued to talk about whether or not I should take the bird to the sanctuary. During our brief conversation, the little bird flew up and over the front of my car, swung around through my open window, and landed on the steering wheel.

The man and I looked at each other and agreed on what I had to do. Some answers come so much easier than others!

You are invited to reflect on the spiritual messages in this story by contemplating on this passage from The Spiritual Exercises of ECK, by Harold Klemp:

How do you work with the ECK [Divine Spirit]? It’s easy to say, “Just let the ECK take care of it,” then sit back and wait. But that is not always going to work. A better way is as follows.

First, figure out what’s wrong and say, “Something’s going wrong. This is the title I’ve given to what’s going wrong. Now I would like an answer for how it can go right.”

Next, contemplate on the problem and look at it from every angle. You may talk it over with everybody who’s got the least bit of knowledge about it. Eventually, if you ask a good question, the answer is going to suggest itself. At some point, it’s going to become very clear what to do.