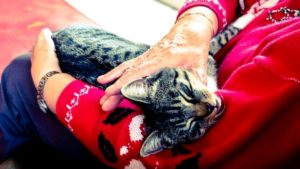 An ECKist [member of Eckankar] has a cat named Humphrey. One evening the woman was lying on her bed reading Child in the Wilderness, a book I wrote about my experiences with the Light and Sound of God. As the woman got closer to the chapter on my experience with God-Realization on the bridge, Humphrey became very excited.

He started running back and forth on the bed. Since it was a water bed, this caused quite a commotion. Then Humphrey grew quiet and just sat on the bed, looking up at the ceiling.

The ECKist looked up at the ceiling too, but she couldn’t see anything. She wondered what had caused Humphrey’s excitement. It was because the cat could feel what I was trying to put into the book. I wrote it as well as I could, thinking maybe someday somebody would understand. Maybe the cat did.

Cats have an ability to see into the other planes, into the Astral Plane. They can see the spiritual travelers who come and go from the Astral to the Causal, Mental, and higher.

Excerpted from What Is Spiritual Freedom? Mahanta Transcripts, Book 11.