A Horse Heals My Heart 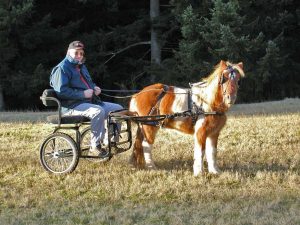 The horse who became my cherished friend had helped me heal from the loss of my wife. How would Divine Spirit guide me through saying good-bye to him?

The story of our journey begins at my horse stable in the country, nine miles from Beavercreek, Oregon. We had eight horses and ponies of our own plus five more horses being boarded at the stable. My daughter gave pony-riding lessons to people of all ages—from young children to seniors. Each day, I’d feed the horses a breakfast of sweet orchard-grass hay. They’d all say “good morning” and “thank you” by whinnying at me.

Yankee, a fifteen-year-old, forty-inch-high, brown-and-white pony, had been given to us. At first, we had wanted him because he would pull a cart and carry small children on pony rides. But Yankee could come to our stable only on the condition that we take his two stall mates—George, who was blind, and Gracie, who was very old. George, Gracie, and Yankee either stayed together, as a package deal, or we wouldn’t get Yankee.

Yankee turned out to be a very special pony. He loved little kids and patiently stood still when they groomed him, even though they had no idea what the proper way was to groom a horse. I didn’t even have to hang on to Yankee’s lead rope. He’d follow me around like a puppy: uncharacteristic for a pony.

My wife translated (in Eckankar, we refer to death as translation, the relocation of Soul from the physical body to a higher plane), and I was still grieving for her when Yankee became more of a comforting friend than just a cute pony. He’d look at me with his large brown eyes and seem to say, “I miss her too.”

Years later, while I fed the horses one day, I noticed Yankee looked different. Normally he’d hang his head over the top of his stall door and beg for hay and grain. Today he looked disoriented and had rolled—something horses often do when they’re sick. So this behavior concerned me.

That night, before falling asleep, I did a spiritual contemplation and asked the Mahanta, my inner spiritual guide, to show me what was best for Yankee. I woke up around four in the morning and checked on Yankee. He definitely looked worse, and I needed an opinion from the veterinarian.

While waiting for the vet to return my call, I stayed with Yankee and sang HU, which seemed to calm Yankee a little. I ended by saying, “Thy will be done” and put Yankee’s future into the ECK.

When the vet examined Yankee, the prognosis wasn’t good. It was further complicated by Yankee’s advanced age of thirty, which is old for a horse. In human years, he would have been about ninety. The vet decided to try one last thing and gave him antibiotics to see if his condition would improve.

Yankee’s condition only worsened, so I called the vet again later in the day. My inner guidance was telling me it was time to let Yankee go. While waiting for the vet to return, I comforted Yankee by brushing and petting him and singing HU.

I had the distinct impression he was communicating with me that he was ready to translate. He looked at me as if saying, “It’s OK. Let me go.” Even though I felt certain that this was the right course of action, I felt very sad. Yankee had been part of my family for fifteen years and was our cherished friend.

The vet arrived back at our stable, and we agreed it was necessary to put down Yankee. I buried him that morning and placed the nameplate from his stall upon his grave. Looking to the Mahanta for inner guidance to strengthen me, I wished Yankee well in his travels in the spiritual worlds where Soul goes after physical death.

I felt very sad and missed Yankee a lot. When I had problems or needed to be consoled, Yankee had always been my go-to horse who listened to my problems and offered a supportive ear.

Soon after Yankee translated, I did a contemplation before falling asleep and asked the Mahanta to let me visit the pony in my dreams. I missed him and also wanted to see if he was OK. The dream went like this:

Yankee frolics with them, and the ponies are having a great reunion. As I leave, they seem to say, “Don’t worry about us. We are just fine.”

When I woke up, I was relieved to know Yankee was much better off, pain-free and having a joyful time with his friends. My heart opened and filled with joy. I had seen in my dream that these Souls’ love for each other had kept them together. As in life, they were a package deal.

By spiritually visiting Yankee, George, and Gracie, I’d received even more from my spiritual exercise than I’d asked for. I felt very grateful for the Mahanta allowing me to reconnect with my pony friends. Even though I still missed Yankee, after this dream it was much easier to let go of him. The dream went a long way in helping me with my grief.

Throughout this entire experience, I used the spiritual tools and principles of Eckankar. They kept me connected with inner guidance from Divine Spirit so I could do my best for Yankee each step of the way and heal from the loss of my cherished friend.