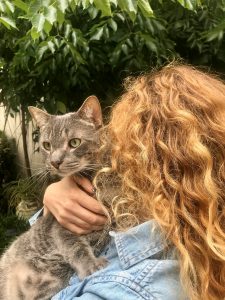 My wife, Patty, and I called Kata our miracle cat. She was a unique blend of qualities packed into one tiny gray kitty. Kata was the nighttime neck-hugging, streetwise toast of our colorful Los Angeles neighborhood. She was also best buddies with Orange, a tough rescued tomcat with whom she agreed to share her home. But one day Kata left our lives. 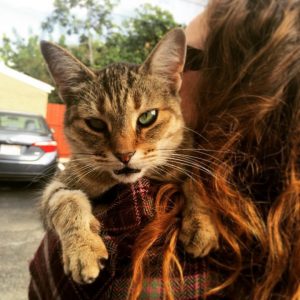 For months afterward, we continued to adjust to the change of losing her. We struggled with understanding it, but over time, we accepted she was gone. Sometimes we talked of getting a new cat or a dog—another little being to share our love with and to help fill the hole Kata left.

We looked at rescue cats and scheduled a meeting with a friend on Facebook. He said he had a cat who needed a home. Then, before we could visit with our friend’s cat, something extraordinary happened .

One Sunday, almost a year after Kata vanished, Patty and I went to an ECK Light and Sound Service at the Eckankar Center of Los Angeles. Like churches or temples, Eckankar Centers are meeting places for people who are interested in a particular spiritual teaching. Patty and I like being actively involved in support of our local center.

After the service, an ECKist friend announced there was an apparently abandoned kitten outside the door. I went to investigate. Huddled against the outer wall, I saw a tiny gray kitten. This little ball of fur shivered in the cold, rainy weather.

Finding a kitten in this location was quite out of the ordinary. The Eckankar Center is on Sunset Boulevard—one of the busiest streets in the frenetic Hollywood neighborhood. Four lanes of traffic flow along it all day, every day. I could see no mother cat or human who might be connected to the kitten. How had the kitten gotten there? And why here?

I reached down to stroke the little creature, but my affection was returned with hissing and the lashing out of tiny claws. Plenty of spirit there, I thought.

Had a Furry Gift Arrived?

I went back inside the Eckankar Center and returned with an oven glove and a cardboard box. When my wife saw the kitten, her hand covered her mouth in disbelief. We seemed to be thinking the same thing: Could this be a gift from Divine Spirit? Was this the cat who would ease our loss of Kata—the Soul who would join our family in her place? Finding the kitten at such an unusual location—and a place of spiritual significance for us both—made it seem more than a random encounter.

ECKists gathered around us, sharing in our wonder. Soon, we had the kitten in the box. The kitten became quiet, apparently comforted that it was no longer exposed to the elements. We headed to a veterinarian, where we learned this little guy was a healthy boy about ten weeks old. 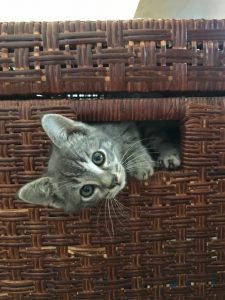 Adopting the kitten was an easy decision for us. He was exactly the pet we were looking for. Patty wanted to call him Quinn, so we did.

Who Are You, Quinn?

In the ensuing days and weeks, Quinn made himself at home in our apartment. He was mischievous, energetic, and loving. The looming question was, would Orange accept him as we had? We had seen how Orange dealt with threats to his territory, and it was not pretty.

I kept the two cats separate for over a week and then gradually introduced them to each other. Let’s just say the look in Orange’s eyes when he first saw Quinn did not reassure me that this would go smoothly. But to my amazement, Orange instantly accepted Quinn. In fact, he seemed delighted by him, treating him like a baby brother. In no time, they were getting along famously—playing together, grooming each other, and generally behaving like besties. 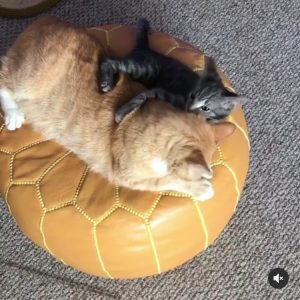 As ECKists, we believe in karma and reincarnation. Karma, the law of cause and effect, is what causes Souls to reincarnate—to be reborn in different bodies in order to learn spiritual lessons. One question Patty and I kept asking ourselves was, Could Quinn be Kata reincarnated?

There were more than a few similarities between the two cats. Both were gray, beautiful, magnificent athletes who loved their freedom. Both were whip-smart; showed strong, independent personalities; and had a great capacity to give and receive love.

Now that some time has gone by, we see that Quinn shows the same adventurous spirit as Kata. But this time around, he’s a lot bigger and a lot stronger. (We figured that if Kata were to come back, she’d probably choose to return in a male body.)

He has yet to answer.

We may never know if Quinn was Kata. Today, this question has become less meaningful. It really doesn’t matter. He is Soul and, as Quinn, he deserves a fresh start.

This Soul, now in a male body, is enjoying a different range of experiences. We accept Quinn for who and what he is, give him plenty of freedom, and shower him with love.

But this much is sure: he, like Kata, is a miracle cat.

—Photos of cats by Laurence Cruz; photo of Eckankar Center of Los Angeles is from www.eck-ca.org/los_angeles/center_photo.html