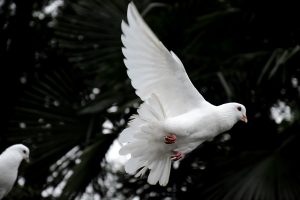 She started to rush toward it; but two young women in the car quickly jumped out to see if they could help the bird. They knelt and soothed its feathers, trying to give it comfort.

When the ECKist realized it was stunned, not dead, she moved away from the others and whispered softly, “I put you into the hands of Prajapati, the ECK Master who cares for animals. Whatever is to be, will be. The love of ECK be with you.” Then she stood back and watched as the two young women gently lifted the dove, put it in their car, and drove off to find a veterinarian for the bird.

About a year later, as the ECKist was walking down the same street, two doves flew down and landed on the sidewalk just ahead of her. One of them limped toward her. Stopping in front of her, it began to make soft cooing sounds.

Suddenly she realized this was the same little dove that had been hit by the car a year earlier. The cooing was its way of saying, “I’ve just come to thank you for the love you gave me when I was injured. The love of ECK goes with you too.”

That done, the bird spread its wings and flew to the roof of a car. It sat there and watched her for a moment before it flew away.

Man in his ignorance likes to pride himself on being God’s special creation. He is certain that Soul would make Its home only in a human body. But in ECK we learn that Soul actually takes up residence in all of the body forms around us—in cats, dogs, birds, and all other life.