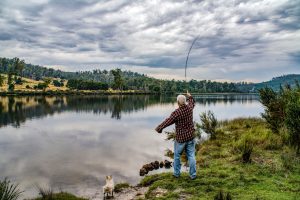 He used to love to go fishing. He’s from the midwestern United States, and he’d go out to the western part of Colorado to do his trout fishing.

This man used a special hook that had no barbs so that he could unhook the fish with the smallest amount of injury and throw the fish back into the stream. He’d thank the fish, the way the Native Americans used to. They always gave thanks for any food that they needed to take from the theater of life because they realized that to survive one must eat another, whether it’s animal or plant. It’s a part of living.

Today we have people who are very self-righteous about being vegetarians. They feel they are more righteous because they don’t eat meat. They are eating plants, as if plants don’t have life or consciousness.

It’s an attitude that says, “I am better than you because I’m a vegetarian.”

I have to say, “Oops, you just slid right back to where you started.”

Self-righteousness is a very heavy anchor to drag around in life—whether it’s because of your belief system, your religion, or your dietary practice. Whatever you eat, it’s important to give thanks for what you take and not waste it.

This is the nature of life, and it’s especially important as more of us crowd onto this little planet, polluting it in every way.

May the Blessings Be

This man went up into the mountains of Colorado. He was an agnostic, but he gave thanks. He appreciated life. But he still didn’t know whether there was a God, and he wanted proof about God’s existence.

He was walking along the edge of a stream to a spot where he thought the fishing would be better. Suddenly he saw a very large trout. The trout looked sick; it had a fungus on its head. The man knew the fish wasn’t going to last much longer. A great deal of compassion flowed from his heart to the fish. He gave the blessing of the Vairagi Adepts, the ECK Masters who are given the duty of bringing the message of truth, of Light and Sound, to the people of earth who are ready for it.

The man said, “May the blessings be.”

Not “I hope you get better, fish,” or “God, please make this fish better” or something like this. We don’t tell God what to do. God has enough things to do without our help—actually God has more things to do because of our help!

Suddenly inside the fisherman’s heart, love began to grow. He had opened his heart by the simple blessing, and this divine love began to flow through him to the fish. And as the love of God came into the heart of the fisherman, he knelt beside the stream, and the fish swam up close to him. The love just grew and grew.

The fisherman wanted to reach down and rub the stomach of this fish. Then he thought, No, it’ll break the magic of the moment. And as he thought this, his heart center began to close again. The love began to diminish, and the trout swam away.

This is an example of how sometimes God’s love enters the human heart. It doesn’t necessarily happen in a cathedral—that may be the last place it happens, because a cathedral is a creation of man’s mind.

There’s a rightful place for temples, a place to come together and sing the holy name of God and study God’s word. We have a Temple of ECK, and there will be more of them. But there is also a time to go inside in silence, to a quiet place, and just listen to the Voice of God. This is what you do in contemplation, in your fifteen to twenty minutes a day. You listen for the Voice of God and watch for some appearance of the Light of God.

When the Light and Sound come into the inner vision, the Spiritual Eye, or the heart, you’ll be filled with a joy and love you’ve never felt before.

Excerpted from The Slow Burning Love of God, by Sri Harold Klemp