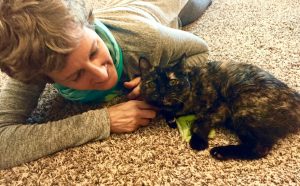 A series of dreams reassured me that the Soul I’d known as Austin had returned as a pug puppy and found a home with a loving family. Austin knew I’m not a dog person and that as a pug he wouldn’t be able to live with me. But he wanted to try out the dog thing. It was nice of him to show me he was going to go lead a dog’s life with somebody else.

About ten years after the dreams that helped me see Austin reincarnating as a pug, I decided I wanted to adopt a cat again. I contemplated on the idea often, filling my heart with love and asking the Mahanta, my spiritual guide, to help me find the right cat for me.

During a spiritual exercise one morning, it became clear that I wanted to adopt a special-needs cat—one who would need extra care and abundant love. Often, when I’ve thought about adopting, it’s been because I felt a bond with a certain animal. Now I realized that, more important than my receiving love and companionship, it would be a boost for my spiritual growth if I provided love for a needy animal.

It’s not about me, I thought. It’s about caring for an animal and going beyond myself. Yet part of my inner drive to look for a kitty cat was that I felt ready for a next step. A lot of change was going on in my life at the time, and I needed a buddy too. I was looking for more than a pet. I wanted to become a greater vehicle for love.

Searching for the Right Match

I started searching pet-adoption websites looking for exactly the right special-needs cat. One morning I came upon the photo of a patchy brown cat with soft, small eyes. The caption under the picture played musical notes in my heart: “Don’t feel sorry for me, but I only have three legs.”

As I looked at the cat’s picture, I sensed the light in her eyes had dimmed. This was an animal who had given up on life and people. Despite the caption’s suggestion of withholding my sympathy, I immediately empathized with her. Not knowing if the disabled cat had long to live, I also felt a sense of urgency. I contacted the pet-adoption agency’s owner right away and arranged to see the cat that weekend.

When a friend and I arrived at the cat-rescue house, I found the tiny cat from the photo upstairs in a room filled with baby kittens. She hid in a little bed near a window, where she may have felt safer.

The three-legged cat was a seven-pound, two-year-old, female tortoiseshell. She had an unkempt coat with many shades of brown fur. It was obvious from her weak energy that she had mostly given up on life. When I saw her hobble along without her left hind leg, I knew she was the cat I wanted to bring home. I immediately loved this tiny being with all my heart.

Who Are You? What Is Your Name?

I was curious about what had happened to cause the little cat’s missing leg. The only history on her was that a woman living in the countryside had come home on a snowy, cold day and found a kitten with a bad leg injury by her mailbox. She immediately took the kitty to a veterinarian, and the leg had to be amputated. It wasn’t clear how the cat made her way to this pet-adoption agency. They could only say, “We take the ones everyone’s given up on.”

During the car ride home with my new pet, I said to my friend, “Let’s take a look at her. What name fits the energy of this little Soul?”

Zimba was a bold name for a teeny cat with not much will to live. Yet I felt an element of wild jungle cat hidden somewhere in her frail body. The name promised to be one she’d grow into, as if her inner tiger wanted to come out. So her new name would be Zimba, and I would call her Zim.

I located a veterinarian chiropractor who helped Zim heal and walk better. The chiropractor called the tolerant Zim her best cat patient ever. Before long, Zim started to regain her strength and zest for life. 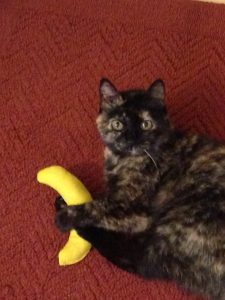 Harking back to my dreams of Austin reincarnating as a pug, I began to notice Zim had the personality of a dog. I am convinced that after a lifetime in a pug body, the Soul that was once my shy and distrustful cat, Austin, came back to me as Zim. But Zimba’s character was very different from Austin’s. She was talkative, loved people, and had a fearless disposition. Even dogs didn’t bother her. Were these traits a result of having lived a recent lifetime as a canine?

I noticed that Zim wanted to go outside, and I needed to find a way to help her experience the great outdoors. She was vulnerable because of her missing leg, so when walking in the neighborhood, she had to stay connected to a protective person. So I put a cat harness on her and attached a leash to it.

Of course, people were taken aback; it’s not a normal sight to see a cat walking around on a leash, like a dog. But Zim enjoyed the attention when people stopped and petted her. With her friendly demeanor, she wasn’t a cat who’d run and hide. As if it was natural for a cat, she kept her own pace next to me, not pulling ahead. “Yeah, I can be on this leash thing,” she seemed to be saying.

In an unusual way, a clue came to answer my question about whether Zim and Austin were the same Soul. I discovered Zim would only eat the same brand of cat food Austin had eaten. Nothing else would do. In a heart message, I asked this Soul, “Is it you, Austin?”