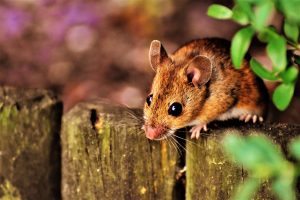 Generally people think of karma as something bad. They never think of it as possibly something good—for example, the three-year-old child who plays the piano brilliantly.

Sometimes karma isn’t as much what you do; it’s where you are. You happen to be in the wrong place at the wrong time because you didn’t know better. When good things happen to you, it’s often just the right time and the right place.

This summer I had my birdseed out in the garage. One evening, I went to refill the feeder. A cardinal, a pretty little red-orange bird, always comes to the bird feeder and makes a racket if I’m late with the evening feed.

That evening it was dark in the garage, and I was in a hurry. I opened the bag of birdseed, stuck my hand in, and fished around with the plastic quart container I use to scoop the seed. Suddenly I felt a mouse running around in the bag, trying to keep away from my hand. It startled both of us.

The mouse was having dinner, minding its own business, when suddenly someone turned on the light and came fishing around in its dinner, trying to catch its tail.

I was sorry this had upset the mouse, but I decided that I couldn’t allow it to be running around in the bag of birdseed. So I went to the hardware store to buy a mousetrap.

At the hardware store I looked at mousetraps. They had the kind that I knew as a child—the kind that are very hard on mice. There must be a better way, I thought, so I looked around some more until I found a very clever device called a humane mousetrap.

This mousetrap plays on the mouse’s curiosity.

Out of curiosity, the mouse goes into a tunnel and steps on a little treadle. This treadle sets off a tiny paddle wheel—similar to ones on the back of riverboats. The wheel swipes the mouse into a little shoe box, and there the mouse is supposed to stay until you come and let him go in the great forest.

When I got home, I set the mousetrap on top of the bag of birdseed. The instructions said to wind it up, but not too tightly. When I went into the garage the next day, there was evidence of the mouse’s worry in the bottom of the box. But the mouse had escaped.

Although I had followed the instructions carefully, I hadn’t wound the spring tightly enough. Evidently when the mouse got into the box, he just pushed the paddle back and walked out.

This time I wound the mousetrap really tight. A couple of days later I found more evidence of a mouse having been in the box. But there was still no mouse inside. Finally I figured it out: wind the spring just a couple of turns so it didn’t damage the trap but still kept the mouse inside.

I adjusted it and made sure the little paddle wheel closed up the opening very nicely, then I set it out once more.

These mice were in the wrong place at the wrong time, but I had the right equipment. We were thus able to both live peacefully. I reclaimed my home, and they found a new one in the great forest.

This is cause and effect.

The mouse had been smart for weeks: I’d found seed scattered around the garage, but I couldn’t figure out how it got there. It never occurred to me that there’d be a mouse in my very clean garage. When I found a hole gnawed through the side of the seed bag, I got suspicious. “Somebody’s here who shouldn’t be,” I said. Then the mouse crossed the line, and we ran into each other in the seed bag. I had to figure out a way to take care of the problem. So I got the mousetrap.

I still use a flashlight when I look into the seed bag these days. I won’t stick my hand in that bag of seed again without first looking for a mouse.

Most people are that way. We get into problems or mischief. Then things go wrong in our lives, and we generally go get the problem fixed. We go to some expert, and he helps us. We go to the doctor to get ourselves fixed up; we go to the banker and take out a loan. But unless we can learn what caused that problem in the first place, we’ll probably continue to repeat it again and again until we figure out what’s going on. Then we can finally get it right.

Adapted from What Is Spiritual Freedom? Mahanta Transcripts, Book 11, by Harold Klemp