After I left home, I often visited my folks on their small ranch in the interior of British Columbia. Late spring was my favorite time to be there. The weather was lovely, with spring-green leaves and grass coloring the countryside.

One year I arrived home to find Dad getting ready to move the cattle with help from several people riding horseback. Annually, when the land was able to support them, we’d move the cattle onto what we called the spring range, where they could roam, unfenced. They’d graze on abundant grasses until the summer rangeland, higher in the mountains, was ready for them. 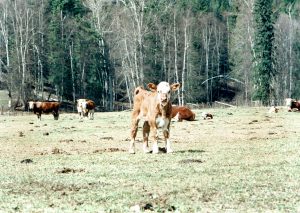 It was late afternoon by the time we were ready to herd the gathered cows and calves from corrals. The first step was moving them through a long, fenced lane into an open pasture area. The cows were supposed to turn left up a short, steep hill to get to the first set of gates which would allow them access to the spring range.

My dad’s cattle enjoyed the well-deserved reputation of being some of the wildest creatures in the area. They were mostly easygoing as individuals. But when they were being moved in a herd, there were a few creative thinkers who could rapidly lead the more docile ones astray. Anytime we moved them, we prepared for the worst—such as the herd breaking apart, wildly dispersing, and requiring many hours to collect again. Yet we always hoped the herd would stay together and go to the intended location peaceably.

Usually when I helped move the herd, I rode one of the horses. But there were fewer available horses than herders this year, so I had to walk.

I went ahead to open some gates and position myself at a crucial spot to help turn the cows. A couple riders were to move ahead of the cattle to make sure they all went around a sharp corner and up the hill. My task would be to bring along slow stragglers.

Sometimes the best-laid plans go awry. This was one of those times. As I waited for the riders to appear, I heard sounds of the cows calling and their fast movements. The first of over one hundred fifty cows and their calves surged around the corner of the field. I knew they would not be slowing down on their own. No one rode in front of the herd to stop them from running or turn them uphill.

Watching them approach, I felt a moment of near panic. It was highly likely the cows would run past me and scatter. Imagine how much work it would take to gather up all of them. While I knew I could stay safe from a stampede, I also knew that one person couldn’t keep the cattle together if they were of a mind to bolt past and run in different directions.

Suddenly, an idea popped into my head: I can ask the Mahanta, my spiritual guide, for help and sing HU. Over time, the Mahanta had taught me that singing HU brought seemingly miraculous solutions for large or insignificant problems in my life. I had no idea how the Masters could help me in this instance, but I had nothing to lose by making a request. I quietly began to sing HU and wondered what would happen.

As the cows rapidly approached, I wildly waved my jacket. I hoped they’d notice me, avoid the jacket, and run up the hill. To my surprise, even though they looked past me toward freedom, the cows slowed to a walk. Instead of stampeding, they calmly walked to where they were supposed to travel.

I felt very relieved that my antics were working. But how was it possible for only one young woman to get the attention of one hundred fifty cows and convince the hungry herd to go in a direction that turned them away from their usual grazing areas?

Out of the corner of my eye I glimpsed a movement and did a double-take. In that short flash, I became aware of seeing two spiritual Masters near me, standing in a perfect line along the route where I needed the cattle to turn. Alone in the field with only the herd of cattle and me, I watched as the Mahanta gently flapped his blue suit jacket. The Tibetan ECK Master, Rebazar Tarzs, also flapped his deep-burgundy cape. Both ECK Masters grinned at me. 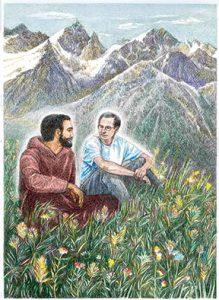 My heart flooded with gratitude. The cows were responding to the ECK Masters’ signals by doing exactly as they were meant to do. I had asked for help with this unpredictable situation, and the ECK Masters provided it in a most unexpected way.

It seemed to me as though the cows clearly saw the ECK Masters and had turned to move up the hill. This showed me that cows have spiritual vision too and can also respond to the calming love that flows through the HU and the ECK Masters.

—Photos by Gai Lawson, and illustration from the ECKANKAR Graphics Kit